Where Can I Buy Bitcoin Online?

Advertiser Disclosure This article/post contains references to products or services from one or more of our advertisers or partners. We may receive compensation when you click on links to those products or services.
Written by Michael Pruser
Last updated on July 17, 2018 Comments: 3

Full disclosure alert, I’m a bit of a bitcoin junkie.  Globally, access to bitcoin is much easier with dozens of funding methods for international investors. However, the US of A has yet to embrace the bitcoin, so being able to buy and sell the cryptocurrency is a lot harder than you might think.

When bitcoin started making waves in 2010, I wrote a brief introduction about the cryptocurrency. At the time, the value of one BTC was just $13 (and was a mere $3 just a week before that!).  Today, the currency holds a value of $900 per bitcoin (as of 1.8.2017). Had I been a bit more clairvoyant — or maybe just less of a wuss — I could have taken my 8,000% profit and retired already.   Lucky for you, I’m still writing and am able to tell you the three most reputable websites to buy and trade Bitcoin.

All of my current bitcoins are held with Bitstamp, which I believe to be the greatest bitcoin exchange on the web today.  Current market price is always spot on and their blockchain tracking software is the the fastest at displaying hundreds of buy and sell orders every minute.  Bitstamp has been around for over five years and has three offices worldwide, one located in New York.   And while I love to use them to store my coins, the difficult part is being able to buy them.  Currently, the only funding method Bitstamp has available is via international wire (as they are a European-based company).  That transfer can take a few days and the volatility of bitcoin means the money I’m depositing may or may not have more “buying power” by the time I can use it.

A view of the Bitstamp trading platform

Account verification is quick and painless with Bitstamp and their fee structure is the lowest you’ll find on any bitcoin exchange.  The most you’ll pay for a bitcoin purchase is 0.25% over spot (and that can be reduced all the way down to 0.10% if you trade more than $20M in BTC over a 30 day period).  For withdrawals, a transfer back to your bank account will only incur a 0.09% fee ($15 minimum). However, depending on your bank, you could incur additional fees (my bank, Citizens, does not impose any).

US-based customers can also request a debit card onto which the money will be loaded.  The fee for loading the card is $10 for amounts up to $1,000. Anything greater than that is a fee of 2%.  A fee structure for using the debit card can be found here.

I do a lot of my buying of bitcoin on Coinbase because it’s the easiest of all websites to buy from. (Then, I transfer the coin to Bitstamp to hold and trade.)  Coinbase has two major selling points for any US-based customer looking to buy bitcoin: 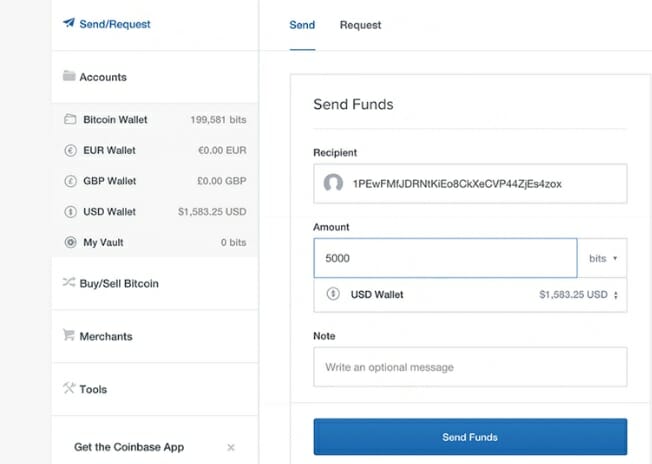 The verification process for Coinbase is a little bit more complex than that of Bitstamp.  Depending on how much of your identification they can verify immediately, your buy and sell limits may be pretty small to start (think $100 USD per week).  You simply need to go through the process of uploading documents, verifying your address with a utility statement, and waiting the initial 30 days after making your first purchase, though. Then, the limits to buy can quickly be raised to $1,500 per week via credit card or $10,000 per week via bank account transfer.

I’ve personally made 50+ purchases with Coinbase over the last couple of years and their BTC delivery has always been on time. Plus, their security is top notch.

CEX.IO is a relatively new exchange, having been around for just under three years (and really only able to buy and sell BTC for two). I’ve recently begun to use them for trading and have dabbled in buying bitcoin through them.  Two immediate differences I have noticed in using CEX.IO to buy bitcoin recently are: 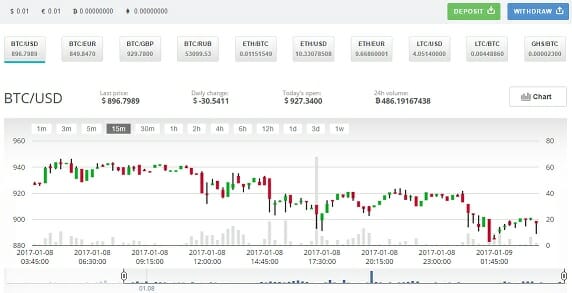 There are dozens of other exchanges and websites that charge even more than the 8% you see listed for CEX.IO. Some are even as high as 60%, so this is about my limit in terms of trying to purchase cryptocurrency.  That said, the trading exchange on CEX.IO is my favorite to use and they’ve now launched a margin trading platform.   If for some reason I need to buy bitcoin and cannot do so via the first two exchanges above (my limits are up, for example), CEX.IO is the way to go.

Through all three exchanges listed above, you have the ability to transfer your bitcoin to and from instantly (confirmed on the blockchain generally within an hour).  So buy on one, transfer to another, trade into Ether, then into litecoin, back into bitcoin, and so forth. Just know that you can move your money around for little to no fees whatsoever (the miner fee to transfer $1,000 of bitcoin between wallets is roughly four cents).  And if you don’t understand anything I just said, I urge you to have a look.  I believe that bitcoin is here to stay, and the number of new exchanges being invested in worldwide is increasing by the hundreds.

If you’re lucky enough to live near one of the 600 US based Bitcoin ATMs, you can buy bitcoin there.  The average ATM fee is 7.9%.

< Previous The Philadelphia Soda Tax Is Now In Effect - Time to Start Drinking Water
Next > Would You Rather Receive a Refund or Owe More Taxes?

Hi there! Thanks for the article. Linkkoin .com is giving 5$ in BTC for registration. Just check it out!

Seems to me you’re paying way too much in fees. Some sites allow deposits of $, sales of Bitcoin and/or purchase of Bitcoin fee free.

Christopher, would love to see an example if you have one. No site I’m aware of has a better fee structure than Coinbase or Bitstamp.