About the author: This guest article is presented by Jeremy M. Simon, who writes for Taking Charge. Jeremy’s articles focus on payment card and debt trends impacting consumers.

Thanksgiving is nearly here, and credit card misdeeds show no sign of letting up, meaning yet another well-stuffed edition of Criminal Charges, my weekly roundup of news items combining payment cards and crime. The turkeys I’ve got for you this week include a Malaysian housewife who could get whipped for card theft, a robbery suspect who apparently set up his supposed friend, a pair of reckless drivers and an athletic duo who swiped credit cards and distributed pot.

Malaysian credit card thief could take a beating
U.S. cardholders may gripe about the abuse they suffer at the hands of banks, but it’s nothing compared with what happens to credit card thieves in Malaysia.

Kuala Lumpur housewife Loh Yin Fun stands accused of using a fake credit card to purchase a Rolex while posing as tourist “Linda Goodman.” This apparently bad lady could suffer an even-worse fate: up to 20 years in prison and a fine, with a potential beating for the alternative charge of attempting to cheat the shop salesman who sold her the Rolex watch. “If found guilty, she can be jailed up to five years, whipped and fined under Section 420 of the Penal Code, read together with Section 511 of the same Code,” reports The Star Online.

Loh has apparently denied using the credit card. Based on the possible punishment, I would, too. 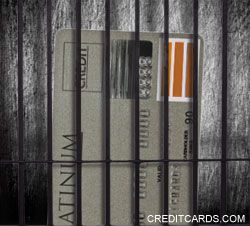 From the ‘With friends like these’ file
A planned Nov. 18 meeting between two Pennsylvania men never happened, instead leaving one a victim of theft and the other a robbery suspect.

Curtis Sheetz told police that he was supposed to meet Marco Campollo at Campollo’s Bethlehem, Pa., home, but when he got there was instructed to wait for his alleged friend in a nearby alley. Campollo told police he asked Sheetz to wait there to buy time since he was taking a shower when his friend arrived.

As he sat in his car, Sheetz was met not by Campollo, but instead by brothers John “Smokey” Dewitt and Quadar “Biggie” Dewitt. Biggie was wielding a big weapon — a 12-gauge shotgun, police say. According to police, Quadar Dewitt “leveled the shotgun at Sheetz and rifled through his pockets — stealing $200, an identification card and a credit card” while John Dewitt “opened the passenger door and tried to take the keys out of the ignition,” reports The Express-Times. “Bethlehem Detective Sgt. William Dosedlo said the three men struggled and Sheetz drove away. The passenger-side window of his car was smashed during the incident.”

Despite Campollo’s story about keeping clean, Dosedlo says that his cell phone activity showed otherwise, with two calls made to John Dewitt within one minute of Campollo’s conversation with Sheetz. Court documents indicate “the Dewitts allegedly admitted to police that Campollo set up Sheetz and agreed to a cut of the stolen money — about $84,” The Express-Times reports. I guess some people actually can put a price tag on friendship.

“Police found about $120 at the Dewitts’ residence and later recovered the alleged shotgun wrapped in blankets in the Dewitts’ backyard,” as well as drug paraphernalia from their residence, the paper reports.

The Dewitt brothers and Campollo were slapped with several charges, including robbery and aggravated assault. Campollo’s BFF status was likely also revoked.

Ex-Gamecock hoopsters sentenced on credit card fraud, marijuana charges
In yet another case of athletes and credit card crime colliding, two former University of South Carolina women’s basketball players are set for a year-and-a-half of probation after pleading guilty to stealing credit cards and possessing marijuana for apparent resale.

Ashlie Billingslea and Jasmine Payne were sentenced to five years of prison for their crimes, suspended to 18 months of probation under the youthful offenders act, and are required to pay restitution to the victims whose credit cards and debit cards Billingslea and Payne stole from Blatt Physical Education Center last March.

According to GOgamecocks.com, “The players were charged with taking the stolen cards and, in one instance, using them at Wal-Mart to purchase a TV and other items totaling more than $400, assistant solicitor Dolly Justice said.” The hunt for plastic uncovered the pot. “While searching their dorm room for the credit and debit cards, campus police also found 21 grams of pot divided into 44 plastic bags inside a team-issued gym bag with Billingslea’s name on it.” Who says athletes can’t do math?

Driven to crime
An Illinois man decided to see just how rugged his Hummer really was.

On the evening of Nov. 14, John Eager crashed his vehicle through the parking gate at Advocate Christ Medical Center in Oak Lawn, Ill. He had a good explanation, though. Police say “Eager told the arresting officer that he crashed through the gate because he did not see an attendant on duty and he did not have a credit card with him to pay for the parking fee,” the Chicago Tribune reports.

A security guard detained the overly impatient (but plastic-free) Eager until police arrived. The driver was charged with criminal damage to property.

Public (official) intoxication
Meanwhile, a former county commissioner and current school board member in Tennessee had his credit card on hand but shouldn’t have been behind the wheel.

Mark Edward Wilkerson of Chapel Hill, Tenn., was charged with driving under the influence and refusing to take a blood alcohol test, according to public records, after a sheriff’s deputy pulled Wilkerson over for driving his white 2002 Cadillac Deville in an erratic manner at about 1 a.m. on Nov. 16.

Wilkerson apparently told Marshall County, Tenn., Sheriff’s Deputy Tony Nichols that a call to the chief deputy and the sheriff would solve any problems. The deputy noted an empty beer bottle on the rear floorboard of the car.

According to a report by the Marshall County Tribune, “Wilkerson initially ‘removed a credit card from his wallet thinking it was his driver’s license,’ Nichols wrote in his report.” The deputy also noted in his report that Wilkerson denied both driving under the influence and having any empty or open containers in his vehicle. Not surprisingly, the driver performed poorly on field sobriety tests.

If you enjoyed this article, please visit Taking Charge for more articles about credit and debit cards. We would appreciate your comments and reactions, so if you would like to contribute to the discussion, add your comment below.

< Previous Banks You May Not Know About Offer High-Yield Savings Accounts
Next > The Battle Royale: You Versus Yourself

Oh, boy! What a way for a fellow Malaysian to be featured on this fine blog.

BTW, a whipping is more akin to caning. The convict is tied to a post and beaten with a rattan stick. Stories abound that criminals prefer a few more years to a few strokes of the rotan.

Would you say that the Illinois guy who crashed through the gate was overEager?