Growing My Dough: The Latest Look at My Portfolio

The editors at CNN devised the index by looking at seven factors in stock market prices, including the value of the S&P 500 index versus its 125-day maximum and other measures of price relative to recent history, demand for junk bonds, and the perceived benefit of stock investing versus Treasury bonds.

Here is what you can expect from the index:

When the S&P 500 (SPX) plummeted to a three-year low on Sept. 17, 2008 – the height of the financial crisis — the Fear and Greed index sank to 12. The index gained some ground to 28 before stocks finally bottomed out on March 9, 2009 and the latest bull market began.

This particular index is a volatile measure of the stock market, and using the index to inform investment choices is probably a bad idea. It’s easy to fall into the trap of timing stocks. While the greed index is high today, buy-low-sell-high logic seems to indicate that now would be a good time to sell. You can use the same logic to rationalize selling stocks now, with the S&P 500 above its 125-day moving average.

Unless you’re willing to accept a lot of risk or are playing with a small portion of your portfolio, you’re better off ignoring these indicators and holding onto stocks for the long term. You’re too liable to make mistakes when timing your investments, and the biggest problem would be getting “back into the market” before the increases in the stock market following dips — the same increases that justify long-term investing in the stock market in the first place.

I seem to have a good job of ignoring the market recently. I had no idea where the stock market was until I started looking at my portfolio for my monthly review. And this year, I’m participating in the “Grow Your Dough Throwdown,” a friendly competition among financial writers who all agreed to invest $1,000 of their own money at the beginning of 2014 and track their progress following a chosen investing philosophy.

At the beginning of the year, I invested $1,000 across several stocks or their equivalents, including Microsoft, Canon, Apple, Samsung, and Honda. I invested a small remainder in an index fund to round out the $1,000 investment. I included the transaction fees in this investment, which resulted in less money available for the actual investments from that $1,000.

Those fees. Five months into the year, and I still haven’t broken even because of those ShareBuilder fees. At the same time, the stock market as a whole, even the securities I chose, are performing better than my investment would have anyone believe. Because of those fees. 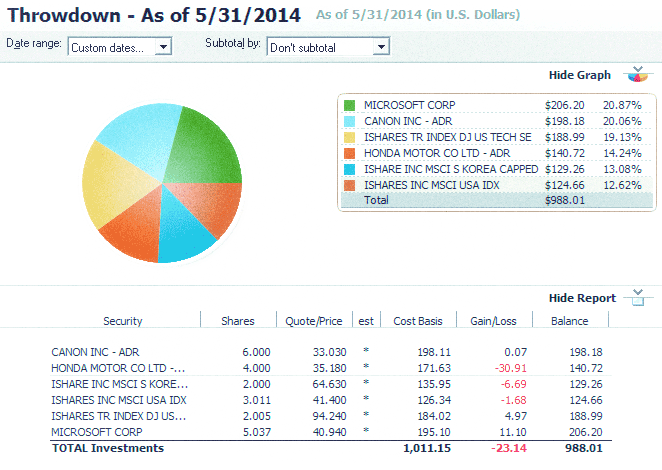 Thanks to dividends earned in March, I own more shares of a few of the stocks, and my cost basis has increased. That still isn’t enough to make up for the transaction fees. I could have used a different brokerage that offers a no-fee option, but these are usually available for only a limited time or for just bloggers who write about the software. My experience reflects a more likely scenario for most investors who choose to invest in stocks on a regular or occasional basis.

My month-end balances show that I’m not seeing much growth so far this year.

Compared to the S&P 500, as you see on the left, my philosophy of picking five good stocks to buy and hold throughout the year is a little foolish.

But what are the alternatives? I suppose there’s an argument for picking better stocks from the outset, but no one can accurately pick stocks on a consistent basis, regardless of how much information they have. The only real way to beat the market is to have large enough buying power to manipulate the market — to negotiate investing deals like Warren Buffet did when he received a $1.4 billion discount for $5 billion worth of Bank of America stock. Can you negotiate a discount like that when you buy stocks?

If not, consider investing for the long term. Investing challenges like this are fun, but I wouldn’t do it if I weren’t willing to, in this case, risk $1,000 in the name of science.

In contrast, my investments at Vanguard, where I have a nest egg invested between stock market index funds and bond index funds, have increased about 5% as of May 31. This obviously contains funds I’m not willing to lose to the small-duration fluctuations of the stock market.

Although I’ve done a good job of leaving this nest egg alone since its beginnings during the height of the success of my business, I may start shifting my approach and begin using proceeds from these investments. I haven’t touched much of the proceeds from the sale of my business except to pay fees and taxes, holding onto the idea that I want my assets to last the remainder of my life without depleting. But allowing myself to use investment proceeds for normal living expenses — most of which I have still kept to a minimum despite my gradual change in financial condition over the past decade — will give me more flexibility to not have to worry about producing income from my work all the time.

How are your investments performing this year?

Thanks, Julie. I’m not sure how that happened but it’s fixed now.

Sorry Luke, but it appears that it isn’t fixed.

Problem looks to be in the 2nd paragraph still. “That’s one week….”.