This is a guest post from Pinyo, author of Moolanomy, a personal finance blog about money, wealth, investing, and more. Subscribe to Moolanomy’s RSS feed here. In this article, Pinyo’s excitement about his net worth increase is tempered by the declining value of the dollar.

I just completed my September net worth review and noticed that I am actually less wealthy. While my net worth went up 1.24%, the value of U.S. dollar went down by 2.26%. You may think that this doesn’t concern you, but it does because we are an integral part of the global economy. For my family, this is even more important because we have direct financial dealings outside of the United States.

The realization that my wealth went down got me interested enough to trace this back to 2000. This period is particularly interesting for me because I have been beating the S&P 500 since then. From the chart below, you can see that market returns weren’t great, but they did manage to yield a 3.31% CAGR (i.e., compounded annual growth rate). 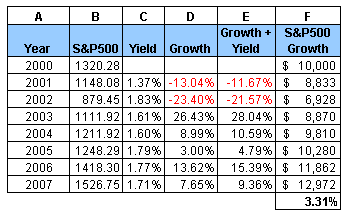 Now, let’s look at the U.S. dollar against 3 major currencies: the British pound, the Japanese yen, and the euro.

According to the Inflation Calculator from InflationData.com, the inflation rate from January 2000 to January 2007 was 19.91%. This means that most American investors are less wealthy now than they were in 2000!

What does this mean?

* This doesn’t mean I am going to make any immediate change. For instance, I wouldn’t start gambling in the foreign exchange market (Forex). To me, currencies are not investments. They are speculative, and not suitable for lay investors like me.
* I am glad to have 30% of my portfolio in international funds. But, this doesn’t mean I should increase it to 50% either. I think the key to success is diversification, including having both domestic and international investments.
* This means that our wealth is affected by the global economy. As such, we should be aware of what’s going on outside of the U.S. and looks for way to grow our wealth more at a global level.

Please let me know what you think about this different perspective on wealth by leaving a comment. Thank you.

i’m new (like, really, REALLY new) to all this finance stuff, but going back to the foreign investors buying american assets: i live in san francisco, where buying a house borders on the insane, and a lot of properties are being snapped up by foreign companies, which sucks because that’s even less places for me to not be able to afford.

Goods and services? They can also use dollars to buy US (and other) ASSETS, like mines and real estate. It’s the assets that we are giving away by devaluing the dollar. Lots of relatively well-off foreigners bidding up asset prices mean less $$$ in your pocket at the end of the month.

Your wealth is only decreasing your buying capacity of foreign goods in foreign currencies that aren’t pegged to the dollar. Stop buying foreign goods and your wealth won’t decrease. I think this whole US devaluation is rather silly considering that the economic fundamentals of the other countries (chiefly EU countries) are worse than the US. ok, so it costs more to go overseas, well do some exploring in the U.S. then. that’s how these supply/demand things are supposed to work and how currency balances get rebalanced.

i’d be cautious about the china wave. china is going to have to do something with all it’s u.s. currency, and holding devalued currency isn’t in the best interest of china in the long run.

people forget that this whole global economy really does benefit the u.s. more than any other country out there. petro dollars = u.s. dollars. sure there is a lot of u.s. dollars out there on the other end, but they have to buy u.s. goods and services with them at some point. moreover, if they trade the greenback to something else, then someone has to buy the greenback either for a substantial loss or for a substantial profit. either way, they will then have to use it to buy u.s. goods and services.

personally, the recent decline in the u.s. dollars doesn’t phase me a bit. the u.s. can absorb a substantial decrease, the real question is what other countries can or cannot absorb.

The decline in the US dollar is directly linked to 1) how much of it is printed, and 2) how easily it is given away. For a primer, try to find out how the money supply was measured in the past and how it is now. The results of your research will surprise (and maybe worry) you…

I’d like to see an article with why the dollar keeps on decreasing in value.

@Mark – thanks for that clarification — it’s a great point. I know we can’t avoid it, but I wouldn’t do my own forex trading. However, I am comfortable enough to invest in international stocks and funds, which I think is sufficient for someone at my level.

I don’t know which investments you have but you are involved in the currency market whether you like it or not.

Let’s say you have a foriegn investment fund in Europe. That investment is not based on American dollars as we wouuld like to think. If you buy a stock in a foriegn company, that company deals in the specific currency it is based in.

For example, its a British company, it does not report their quarterly profit in dollars, it reports in pounds.

We Americans just translate it into American dollars so it makes for easier comprehension.

Likewise, your fund may be invested in foriegn bonds which is tied into the currency market of that country.

The depreciating dollar has nothing to do with the market, if any, it is reducing the foriegn debt our American companies own so their statement actually looks better for your dollar.

It’s like saying the air we breathe is not connected to India, China, Antartica.

The depreciating dollar is one of the reasons why the bulk of my investments are in Asian funds.
-chasing the China wave.

Flexo – Thank you for the nice intro and nice touch with the photo. It was my pleasure to write a guest post for your blog.