Make the Most Out of Best Buy

Money Magazine has tips for getting the most out of a Best Buy shopping trip, which reminded me to share my story of yesterday’s experience.

In my circle of friends, the big box retail store known for its bright blue and yellow logo is known as “Worst Buy” thanks to the multitude of headaches their shopping experiences have caused. I’ve never had a problem with them, but I do recognize that they rarely have the best prices on smaller items. Many times I’ve ended up going to Circuit City for eletronics at a better price, Amazon.com for other random items, and Monoprice for cabling.

Nevertheless, I finally found a low-cost surround sound receiver and speakrers that matched my budgetary, audiophilic, HDMI, and spatial requirements. Circuit City and Best Buy were selling the system for the same price online, but only one local Best Buy location — the one closest to my office — had it in stock. I stopped by the store yesterday on my way home. 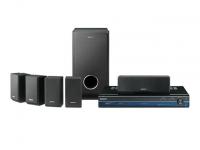 I came into the store knowing exactly what I would be purchasing and that they had three of them in stock. When the salespeople stopped chatting and decided to help, I confirmed I could pay the online reduced price, and they fetched the system from the back.

The system, the Sony HT-SS2000, was no longer on display, presumably because the discounted price doesn’t provide the store with a profit margin as high as the margins on the more current items.

While one salesperson was bringing the system to the front, I asked the other about the 30 or so Blu-ray players stacked in boxes. I have seen refurbished or reconditioned players at the Sony Store for half price, so I asked if they had any “open box” or reconditioned items for sale.

They had no such deals, but they did offer me 10% off a new Blu-ray player on the spot. I declined as that wasn’t in my budget for the day.

If they would have offered me a $499 player for $250, I would have adjusted my spending limit, but that was not to be. I am disappointed that movie production companies are increasingly aligning with only one high definition format. Unlike the VHS vs. Beta debate, I think this could take much longer to hash out, and there may never be a clear winner.

The salesperson wasn’t eager to sell me add-ons and accessories. He probably recognized I was a fairly informed shopper. After declining the extended warranty, overpriced accessories and installation service, I made the purchase on my cash back rewards credit card, and proceeded home to install the system myself.

Money Magazine has the following suggestions for shopping at Best Buy. These tips could save anyone a few dollars and some headaches.

* Salespeople don’t work on commission, so be friendly to receive the best service.
* They will try to sell you overpriced accessories to recoup the margin lost on competitively-priced main products.
* Weigh the cost of installation with your ability to do it yourself or have someone do it for you.
* Read the fine print on the return policy and watch out for restocking fees. In other words, be sure of the product you want to buy so you aren’t returning it unless it’s defective.
* Best Buy will match competitor’s lowest price by refunding 110% of the difference if you find a qualifying advertisement within 14 days. There may be some disagreement with what counts as “qualifying,” so watch out.

It took some time to get my new surround system working properly with the HD DVD player. I wasn’t getting an audio signal occasionally, and I think the problem may have been related to the HDMI signals not synching properly. By the end of the night, everything was working well, and I was certainly enjoying the sound.

Best Buy should be embarassed by its customer service and retrn policy. Recently my employees gave me a nice camcorder for the holidays. The packaging indicated clearly it came from Best Buy. I donâ€™t need another camcorder so I tried to return it. NO RECEIPT, NO RETURN. PERIOD. I even appealed to corporate customer service who promised to email the store manager, plead for mercy and ask him to call me. He (Dave Pena of the Woodland Hill, California store), never called. After a few days I called customer service again. Again they sent an email to Dave. No reply. Today I called a third time and received a message back from customer service. Their advice? â€œSell it on ebay.â€?
Think Iâ€™ll ever shop at Best Buy?

you are usually better off shopping anywhere but at BB. However, if you are purchasing multiple high ticket items, they definitely can make you a deal.

I updated my stereo system a few months back. The reciever they offered with the package wasn’t what I wanted, so they let me upgrade basically for the difference. I was then able to knock off an additional 15%. In all I got a great setup for cheaper than i would have found elsewhere.

Be nice, realize you aren’t going to get some 40% hidden gem sale, and you’ll be fine.

Great Post. I find that both circuit city and amazon are much better places to buy electronics. I find myself at Best Buy often though because there is one every two miles here in San Diego. I’ve always had good experiences with them other than the fact that I can usually find the products somewhere else cheaper.

I worked there a few years back and was rather impressed with my manager. He told us his responsibility was to, “fight fires and get yelled at by customers”. That’s it.

I agree their pricing isn’t always great, but the store is beautifully designed and more fun to shop in than Circuit (even though checking out can suck).

My friends call it “Worst Steal.”