In a domain once reserved for U.S. News & World Report, the government is stepping in to rank United States colleges by affordability, as mandated by Congress. This ties right into zeitgeist; thousands of families are thinking about college as we head deeper into summer, and high school students and their parents are evaluating their options in a period of higher unemployment and lower income.

The U.S. Department of Education has developed an online tool that allows visitors to view a list of the top and bottom colleges as ranked by total tuition and required fees and by total net cost, the latter taking grants and scholarships into account. The reports can be filter by type of institution from among the following choices: 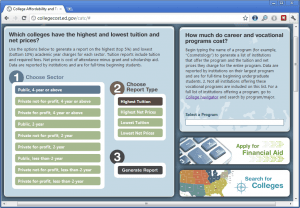 The tool also conveniently offers a summary of schools that have seen the largest increase in fees from one year to the next, leading into the year for which the latest data are available. Among four-year public schools, for example, the highest increase in net costs is Northwest Indian College, which soared from $484 one year to $11,731 the next, an increase of over 2,000 percent. While I’m not familiar with the details of this particular schools, I am aware that many institutions are losing state funding due to a variety of budget crises, and as a result, must lean more on tuition to fund operations rather than state aid. This highest increase among private four-year colleges is striking, as well, with Our Lady of Holy Cross College students seeing increased costs from $428 to $2,874, a 571 percent increase.

For colleges that charge out-of-state visiting students a different tuition schedule than they charge in-state residents, the information presented through this tool will be unreliable. As a New Jersey resident, for example, I couldn’t use this tool to compare my expected cost difference between attending a college in New Jersey and in Delaware. Attending school in Delaware, I would need to pay the out-of-state rate, which is often significantly higher than the in-state rate. Since the tool only includes in-state tuition costs, I’d have to do more research to compare my options.

I never suggest people should shop around for the absolute lowest cost, whether pertaining to colleges or any other product. Saving money is a worthy goal, but it makes sense to pay for value. For many products, measuring value is relatively easily (except for the needed circumvention of the effects of marketing and advertising). Estimating the value of one particular college over another is quite difficult, so students often end up choosing the school that feels right — unless the choice is dictated by the parents.

How did the cost of tuition factor in which college to attend (for you or your children)? Is cost a good method of choosing a college? Is the Department of Education’s new tool helpful for making this decision?

College Affordability and Transparency Center, Department of Education via CNN

We sent our oldest to college last year. Cost was only one consideration, but it was an important one.

that sounds like a great deal. the tuition increases at my university have been downright scary over the last 5-10 years. the cost before i attended to now, several years after the fact, has not just increased but exploded.

Without including out-of-state tuition costs and other factors, the list seems pretty much useless. In order to get an apples-to-apples comparison, the prospective student could only be considering in-state public or nationwide private schools. Furthermore, the list assumes acceptance at all schools and receipt of no scholarship or financial aid. That is highly unlikely. Finally, the assumption is made that the student is both able and willing to reevaluate and possibly change schools each year (and also once again be accepted and not utilize scholarship or financial aid) in order to continue to retain the most cost-effective education. This is also highly unlikely. To further explain with an example, suppose this list had been available last year, and a student had used it to help choose Northwest Indian College as a low priced school to attend. Then this year the cost goes up over 2000%. Under such a circumstance, I bet that student would classify the list as a failure.

my alma mater as well as most universities in the state of michigan have continuously raised tuition yet the price of books hasn’t decreased. It’s just a shame that many families are being priced out of sending their children to college to further their education and establish a career.

Although Talmudical Academy is low cost, it is for specialties that most people would not participate! College is starting to be a luxury and unless you get sufficient financial aid, it is not feasible. Many of my students are going to community college and transferring to state schools. Unfortunately, in California the universities (UC) tuition to nearing $12K per year for in state students.

My daughter’s school has raised tuition 10-15% per year for several years now, and I fail to understand how they can justify these increases. I agree with STRONGside; the true “cost of attendance” varies wildly from student to student, even if they’re attending the same school. Personal expenses, living arrangements, and transportation expenses greatly depend on how many luxuries the student is willing to forego (i.e. sharing a dorm vs. apartment) and how much privacy they “require” – LOL.

Textbook costs are another variable that depends much on how hard the student is willing to look for bargains. My kid found several books on ebay, plus a couple from Barnes and Noble that were actually cheaper (after my member discount) than they would have been in the bookstore.

As a college financial advisor, I can tell you that this new net price calculator tool that all Financial Aid Offices are going to be required to unveil by October 1st, 2011, can be very misleading. For one, it does not factor in student loans, which like it or not, make up a large percentage of the financial aid that student’s receive in our country. These costs also use the “Cost of Attendance” which is not to say that these are the fees that every student will pay. They include fees such as personal expenses, transportation, and books and supplies which are very relative and vary greatly from one student to another. I would urge caution when using the net price calculator to compare college costs, and they don’t give a very accurate picture of the true cost of attending one institution over another.

My Alma Mater had a modest 3% tuition increase but had a 10% decrease in Books and supplies. Housing had increase in rent but decrease in other expenses. This made for a total decrease of 0.4% this year over last year. Not too shabby. There should be a list of all the schools with total cost decreases.