Advertiser Disclosure This article/post contains references to products or services from one or more of our advertisers or partners. We may receive compensation when you click on links to those products or services.
Written by Michael Pruser
Last updated on July 25, 2019 Comments: 1

Former President Barack Obama signed an order into law back in March 2010, which later became known as Obamacare. He did so with the hope that it would revolutionize the way Americans handled their healthcare.  However, if Obamacare was to ever survive, it required a large number of healthy individuals to sign-up for healthcare.

To “persuade” healthy individuals to sign up for plans, Obamacare included a mandate. This required everyone in the United States who didn’t have other healthcare to sign up for healthcare on either the state or government exchanges… or else.

This meant that if you had healthcare from your employer, you were covered. If you signed yourself and/or your family up on the exchanges, you were covered. But if you currently had no health insurance, and did not have an employer that offered it to you, then you either had to sign up for healthcare on the exchanges or face a financial penalty. In 2016, the penalty for not having health insurance was $695 per adult, $347.50 per child, OR 2.5% of your adjusted gross income (whichever number was higher), with a maximum amount per family of $2,085.

Related: Another Insurance Giant Pulls Out of Obamacare

The end result was tens of millions of Americans still declining to sign up for Obamacare, which meant the amount of money in the health insurance pool was far lower than what was predicted.  To compensate, health care providers increased the costs for existing exchange owners, sometimes as much as 115% year over year.  Hanging by a thread, the law needed Hillary Clinton to be elected president in order to survive. Instead, it was given Donald Trump. 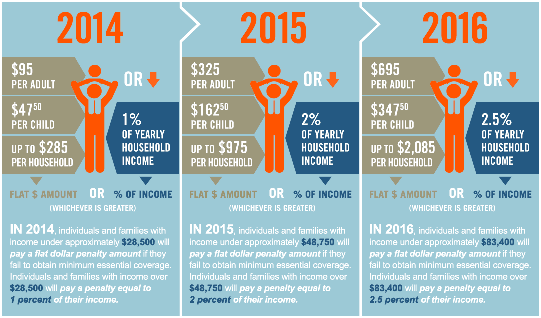 It may feel like Donald Trump has been president for four months and not four weeks. However, if you can think all the way back to President Trump’s first executive order, it was one to remove the enforcement of the Obamacare mandate. To put it simply, President Trump ordered the U.S. government to defer to the individual, rather than the government, should a dispute arise regarding the enforcement of the mandate. This didn’t really mean much the day he signed it because its implementation was unclear. However, last week the IRS put out a statement that said, “If you don’t answer the healthcare question on your tax return, we will still accept your return.”

So, Line 61 of your 1040 tax return will ask if you had healthcare coverage for more than 9 months in the 2016 tax year.  Before this change in policy, you had three options to answer the question:

Now, there’s a fourth option for every US taxpayer:

To be clear here, there is no guarantee that if you leave the question unanswered, the IRS will simply look the other way.  The IRS has not explicitly said they will be avoiding all Obamacare penalties for the 2016 tax year. However, considering they’ve decided to allow taxpayers to leave this question blank, it’s highly unlikely that they plan to create more work for themselves and audit individuals who choose to avoid the question.

Thus, in one stroke of the pen, the mandate is done. This all-but-means that Obamacare has been effectively killed, and the need for a replacement healthcare plan is of great urgency.

Knowing that the end is near for Obamacare (you might say it’s already here), the next logical question is: Will there be a Trumpcare mandate and, if so, what will it look like?

Well, I’m here to tell you that a gentleman by the name of Tom Price proposed a conservative healthcare plan back in 2015…and wouldn’t you know it, he’s just been confirmed as the new Health and Human Services Secretary. Without getting into specific detail about the entirety of the plan, I’d like to focus squarely on his idea for how to make a mandate work in the future.

The crux of Obamacare, and the part that Republicans have always hated, was that it forced people to buy health insurance, even if they didn’t want it. But you see from the text above that the only way a national healthcare plan would work is if everyone contributed, healthy or otherwise. So, how can a Republican plan provide enough money so that those with Obamacare do not lose coverage AND people that don’t want health insurance don’t have to buy it?

Resource: 15 Auto Insurance Discounts You May Be Missing

Now, this is not to say that the healthcare proposal Congressional Republicans put forward will include a mandate specifically like the one above. It is simply an idea on how to go about getting people to pay for health insurance, without forcing them to pay for health insurance. You can bet any plan that we see proposed in the next few weeks will receive extreme scrutiny from tens of millions of Americans, so the benefits and drawbacks will be widely known.

Make sure that when the dust settles, you’ve done your research on whatever 2018 health insurance looks like, and do the best for you and your family. Something tells me you won’t be short of options.

< Previous Buy It Right or Buy It Twice: When It's Worth Paying More for Quality
Next > What is Apple Going to Do with All That Cash?

Awesome article, thanks for sharing. I am not sure “Trumpcare” or whatever he comes up with will be better than Obamacare. Wait and see.