Overbooking Flights is Good for the Consumer - Let Me Explain

Advertiser Disclosure This article/post contains references to products or services from one or more of our advertisers or partners. We may receive compensation when you click on links to those products or services.
Written by Michael Pruser
Last updated on July 28, 2019 Comments: 3

As the entire world has likely seen by now, United Airlines removed Dr. David Dao from his Sunday evening flight, by selecting him at random and then dragging him off the airline.

While the United apology tour took a good 48 hours to get started, they finally came around and said they were very sorry for overbooking the flight, and they promised to do better next time. Chris Christie, governor of New Jersey released a statement that said Airlines should abolish the practice of overbooking to avoid situations like this in the future and has asked President Trump to consider the idea.

It’s time to separate the fact from the fiction.

United Flight 3177 Was Not Overbooked

Let’s get this out of the way first. The irony of this whole situation is that the United flight from Chicago to Louisville was not actually overbooked. The flight was full; however, the number of ticketed passengers equaled the number of seats on the plane, so the outrage about overbooking isn’t quite right.

United needed four seats opened on their plane to get crew members to Kentucky for work the following day, so they’ve chosen to hide under the “overbooking” policy. What happened here was that everyone who had a ticket was boarded; there were no additional passengers to board, and United decided to forcibly remove four passengers from the plane in order to board non-paying, non-ticketed employees.

The Process of Overbooking

When handled properly, the idea of overbooking makes sense for everyone. Allowing airlines to book 220 passengers for 200 seats may seem like a bad idea, but when you consider the economic principles behind it, the consumer and the airline both come out on top.  For example…

Assume Southwest has a 200-seat passenger plane and a flight on July 1st going from New York (JFK) to Florida (FLL). The flight is available for purchase six months in advance, and Southwest decides to make 200 seats available for purchase. By April 14th, the flight is sold out and taken off the board. All 220 passengers have confirmed tickets to board the aircraft in a few months, but the airline knows that 20 of those purchase agreements will not be honored.

A funny thing then starts to happen beginning May 1st. Every once in a while, a passenger calls up Southwest to ask to cancel or change their flight because their plans have changed. So one by one, couple by couple, family by family, the 220 tickets held for the flight on July 1st begin to dwindle. You have 218 down to 215, down to 210 and so forth. Then by June 30th, the day before the flight takes off, Southwest now has only 205 confirmed passengers for this flight.

On the day of the flight, Southwest is now tracking the number of ticketed passengers who check in, assuming 100% of the passengers that check in make their flights. Attendants show up at the gate. Boarding is about 15 minutes away from getting started, and the full count is in: 202 passengers have checked in for the flight. Three more people either didn’t make it to the airport on time or decided not to take today’s flight, leaving Southwest with a bit of a problem. They’ve overbooked this imminent flight by two passengers, and they need two people to step aside and take a different flight to Ft. Lauderdale. Let the auction begin!

The normal process from this point is to have the attendant at the gate alert the crowd waiting to board that the flight is oversold. They need two volunteers to come to the table and schedule a different flight (sometimes on the same day; other times on the following day). Opening offers generally start in the $300 travel voucher range, and the attendant will continue to raise the price until two passengers come forward to volunteer their seats.

In the instance where there is no reasonable amount of money to entice the crowd to volunteer their seats, Southwest will pick passengers at random. They will offer them the maximum amount of compensation allowed, $1,350, and call it a day. You can see from the chart below how often passengers volunteer their seats, versus the ones that are forced to schedule later flights. In the 4th quarter of last year, 106,000 passengers across all US airlines volunteered their seats to others, while 9,000 had no choice.

So, this begs the question… why is having 9,000 passengers forced to take flights they don’t want a good thing for the market?

Imagine the scenario above where Southwest sells only 200 tickets initially instead of 220. As passengers begin to fall off the rolls, Southwest reopens the flights online. The later and later this happens, though, the less likely they are to find passengers to take these now open flights. They will be able to re-book some of the seats, but not all.

Yes, the airline will have to compensate the overbooked passengers, but it rarely, if ever, comes out to more than they’ve already taken in. Even when they have to give the full $1,350 to passengers who do not volunteer, they’re still likely in the green (assuming a modest $250 ticket price in our scenario above, 15 additional ticket sales means $3,000 in revenue vs. $2,700 in compensation to involuntary bumps). And the chart above shows that for every 11 passengers who accept modest compensation, only one does not… so the added revenue per overbooked flight can be quite substantial.

Another reason why overbooking is essential in the marketplace is the freedom to cancel and change flights. Some airlines offer no cancellation or change fees, while others charge a small to moderate fee. If overbooking was not allowed and airlines were forced to book only the number of seats they had available, it’s very likely the ability to change flights would be restricted, or at least much more expensive, than it is today. Airlines are now a bit more forgiving when it comes to schedule changes because they know they have “reserves” available to take your place if needed. In their eyes, it’s no biggie. 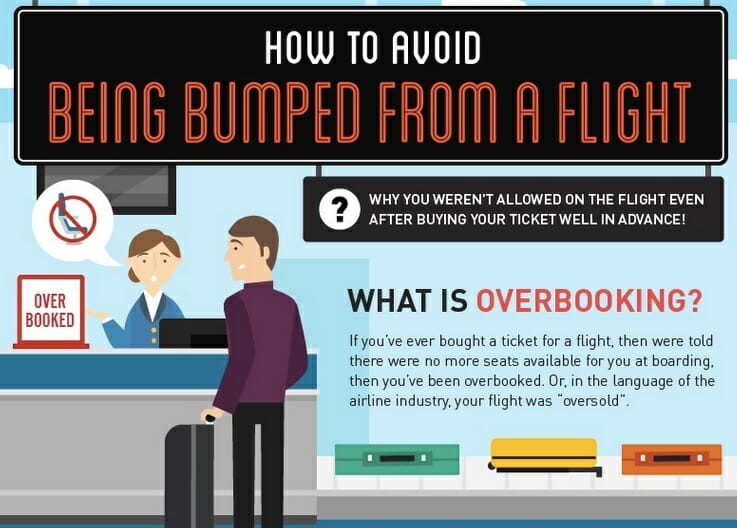 Many airlines also offer their own branded airline miles credit card, which offers perks to allow customers to change their flight plans at no cost. As is standard operating procedure with airlines, if they’re forced to spend more money or end up taking in less revenue, the first thing to disappear is usually the quality of their rewards program.

Added Revenue for the Consumer

Some travelers are flexible when it comes to getting to their destination. Perhaps they’re heading home from a vacation and wouldn’t mind spending an extra day around town. Perhaps they’re headed out for a business meeting that can easily be pushed to Tuesday instead of Monday. Why not take the opportunity to cash in a few free flights down the road for a few hours’ inconvenience? There are well-established online travel bloggers who show in detail how they do this. They’ve earned thousands of dollars in compensation, simply for the willingness to take the next flight available. Some even show how you can tackle this more than once a day and almost consider it a profession!

Of course, there’s no such thing as a free lunch, and there is one obvious negative attached to the concept of overbooking. If you are one of the nearly 9,000 passengers last quarter who did not want to leave your flight because of a commitment you could not miss, $1,350 may not be good enough.

This is the very reason why many advocates of the policy are looking to have the maximum compensation amount revised or altogether removed to allow for a true bidding process. If the airline is forced to keep adding to their offer in order to ensure 100% of passengers voluntarily give up their seats, the right flight could yield quite a large number. Even so, in the rare instance that happens, the airlines and the marketplace will still be thankful that they’ve overbooked the flight.

There is no denying that the way United staff handled the United Flight 3177 issue was the exact wrong way to do it. Add on the non-apology from their CEO Oscar Munoz, and for years, people that book their flights will remember this incident. Many of them will even look elsewhere for their travel needs.

But nothing about this PR disaster has anything to do with the concept of overbooking. When executed properly, it’s an essential practice to keep costs low for all consumers. If the day should come where maximum compensation amounts are lifted, overbooking will become an even greater asset to the airline community.

< Previous The FNBO Direct Checking Account With BillPay
Next > Is Quicken Right for You? Here's Our Ultimate Quicken Review

It’s mot good for the marcket, nigther for the customers! It’s juste a legalised way of ripping off the costumers… Nothig less, notbing more, and that’s all.

PS: costumers who experience it, Beber come back to this compagnie, unless to be forced of. Beber meind and see the good for anyone on this, to real economique going on prévention plans, anywhere ….

I agree with John, fees are not minimal for changes or cancellations. Another thing, you day they airlines are missing out on revenue when people cancel or don’t show up for flights… This is flawed because the airlines rarely refund money in these situations! They may actually get paid double because they can put somebody else in that empty seat that was paid for. I understand over booking but this doesn’t make the best case for why it is good for consumers… Might be a wash.

I would be ok with overbooking if we the consumers were permitted to change flights for free or a minimal charge. having said this, change fees are anything but minimal. Often times the change fee can equal the cost of the ticket.