Advertiser Disclosure This article/post contains references to products or services from one or more of our advertisers or partners. We may receive compensation when you click on links to those products or services.
Written by Michael Pruser
Last updated on July 22, 2019

Last year, the city of Philadelphia decided to pass into law a “beverage tax,” which taxes the sugary drinks you consume at the rate of 1.5 cents per ounce.  At the time, there was some considerable outcry from residents of the city. Nevertheless, the government stuck to their guns.

Well, at the turn of this new year — on 1/1/2017, in fact — the tax was enacted. Consumers are quickly feeling the effects, and are none to happy about it.

Taken directly from their city government website, Philadelphia lawmakers explain where the tax is to be levied.

The tax is not just on sodas. This tax is on any non-alcoholic beverage, syrup, or other concentrate used to prepare a beverage that lists as an ingredient any form of caloric sugar-based sweetener, including, but not limited to sucrose, glucose, or high fructose corn syrup.

Drinks considered “diet” or “zero calorie” are also taxed. Specifically, this tax is on any non-alcoholic beverage, syrup or other concentrate used to prepare a beverage that lists any form of artificial sugar substitute, including stevia, aspartame, sucralose, neotame, acesulfame potassium (Ace-K), saccharin, and advantame.

A quick look at social media shows hundreds of posts today from people taking screenshots of their receipts to show just how much this tax will actually cost you.  You hear the details of 1.5 cents per ounce and might not think much of it. When you start to buy gallons, six packs, 12 packs of your favorite soda or sports drink, though, you’re going to pay quite a bit more than you expect.  Let’s have a look at an example. 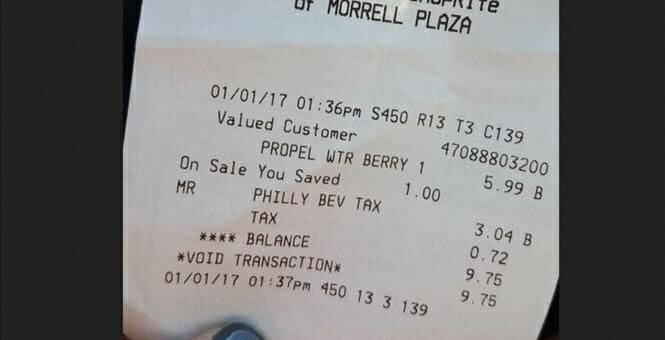 Then, because democracy is so awesome, the sales tax is added AFTER the beverage tax. This means that the great residents of Philadelphia are paying 8% sales tax ON their beverage tax.  A $5.99 10-pack of Propel water (which actually doesn’t have any sugar, ironically), now costs $9.75.  This particular individual was stunned to see the cost, so they voided the transaction. And I don’t blame them.

Who Loses from the Soda Tax?

When you consider what the Philadelphia soda tax is meant to accomplish, there are two clear cut losers:

Who Wins from the Soda Tax?

Once again I can find two clear cut examples of positive outcomes from the Philadelphia beverage tax:

Grocery stores in the city are doing different things in order to inform consumers their drinks are going up in price.  Some list the full price on the sticker below the item on the shelves, some have sent out notices in their circulars, and others have decided to avoid the subject. The latter are just ringing up surprised consumers at the register, which I wouldn’t imagine going over too well for those not paying attention.

Philadelphia makes up roughly 0.5% of the entire US Population. So, while this is just one city, it’s a big one. This tax is now on the minds of 1.55 million people.

Keep an eye on this tax to see if your city adopts a similar policy and plan for a healthier lifestyle to keep your wallet and your waistline in check.

< Previous Why Do I Have More Than One Credit Score?
Next > Where Can I Buy Bitcoin Online?