Repost: Misconceptions About the Transition to Digital Television

I originally posted this article in January 2008. As February 17, 2009 draws closer, I am still dismayed by the misinformation being spread by television manufacturers, cable operators, retail salespeople, and coworkers. Please pass this information to anyone who has the wrong idea about the switch to digital-only over-the-air broadcasts.

Whenever the subject turns to high definition television, I’ve always found a few people who are disappointed because they believe they need to sell their television and upgrade to high definition (HD) by February 17, 2009, they day the lights go out on analog broadcasts. This is a significant misconception, an incorrect assumption that is encouraged by electronics stores that use confusing and sometimes misleading terminology. Stores are encouraging people to upgrade to high definition televisions, inspiring fear that once February 17, 2009 rolls around, their current TVs will go dark, unable to receive signals from their cable or satellite company.

This is simply not true. The only changes will be to free over-the-air signals. For the most part, the only people who will be affected are those who use standard antennas to receive free television. Many people have cable or satellite boxes that are not affected by this change. The cable company will receive those local stations via the required digital signal and will send the signal to your house. The set-top cable or satellite box will use a digital tuner to receive signals and will send the video to your television over an analog or digital cable. 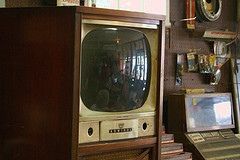 If you subscribe to cable or satellite, this change will not affect you at all. If you use a cable box, the company has taken care or will take care of everything for you. If you receive cable service without a set-top box, you may need to contact the company.

If you are one of the many people across the country who watch only the television programs broadcast over the air, you have three options.

1. The first option is to buy a new standard definition (SD) television set. Almost all new televisions have digital tuners now, but check the specifications before you buy. Don’t buy a “monitor,” which has no tuner at all. You don’t need to buy an expensive HDTV if you want to save money.

2. The second option is to buy a special DTV converter box. These cost about $50, but households can request up to two $40 coupons.

3. The third option is to subscribe to a cable or satellite service. The most basic cable service costs less than $20 per month.

The biggest misconception I’ve been exposed to, particularly at work, is the idea that to receive any television at all after February 17, 2009, you will need a high definition television. This is simply not true. Please get the word out.

The cable situation you described is correct IF you have a set top box. It is also correct if all you watch are “must carry” over-the-air (usually) local TV stations.

The cable establishment has been fuzzy about what they will do with basic tier cable channels such as CNN, C-SPAN, Food network, etc. They can legally move them to digital getting a 6:1 capacity improvement for themselves, but screwing the customers without set top boxes.

Marketplace forces will probably dictate what they do, but this is a topic they don’t want to talk about.

Since most people already have cable or satellite (or FIOS, etc), the biggest chunk of people affected by this are going to be those with portable TVs.

I’m still in the “rabbit ears” crowd when it comes to getting my TV signal, and when I got my converter box I found out that I might not need one:

A lot of people didn’t understand what was going on. Thanks for clearing it up for them. I have had friends ask the same questions to me to only answer with what you just wrote. It is basically getting rid of the extinct technology and TV sets your grandparents may still have and moving on with the technology. The majority of people will never even realize there is a switch because they use a cable box.