Last week, I mentioned I met my goal for charitable giving for 2007. The modest goal, which I set for myself at the end of last year, was to provide $1,000 in support of an organization meaningful to me. This year, I decided to separate myself further from the organization I normally support, which also happens to be a former employer. It’s not that I don’t believe in what they do, but I have some issues with their methods.

This past year, I’ve had difficulty coming up with a replacement besides the pfblogs.org Financial Literacy Challenge. This has been a frustration for me, particularly because I wouldn’t mind managing an arts education foundation of some sort. While researching methods for starting a foundation — an endeavor better attempted by someone with millions of dollars ready to be dedicated and willingness to spend a lot of money just to run the foundation — I came across the idea of the charitable gift fund.

The charitable gift fund allows me to make a contribution to a general fund now without specifying a direct recipient. That also allows me to take a tax deduction for the contribution this year while taking my time to decide where the money should go. In the mean time, the funds are invested and presumably appreciated along with the rest of the stock market. 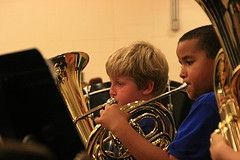 Charitable gift funds, or more specifically donor-advised funds, are organized by several brokerages and public charities. I chose the Fidelity Charitable Gift Fund thanks to its low barrier of entry (only $5,000 to open an account and subsequent investments must be at least $1,000) and its relatively low fees (0.6% including the underlying expense ratios, with a minimum of $100).

In return for the ability to take the tax deduction now, I give up my ability to manage and distribute the funds directly. However, I can recommend grants to charities as long as they are registered under regulation 401(c)3, and therefore legal non-profit entities. It would be very rare for Fidelity or any other custodian to reject a donee suggested by the donor as long as the organizations are not-for-profit and the donor doesn’t directly benefit from the organization’s receipt of the funds.

When I sent in my $5,000 to establish my donor-advised fund, I selected to invest the money in Fidelity’s Spartan 500 Index Fund (FSMKX), which carries an expense ratio of 0.1%. I could have transferred securities or other assets to the fund, but I opted to send cash. Unfortunately, they don’t support ACH transfers, so I had to write a check. A wire would have cost extra money.

Now that the fund is established, I can suggest grants at any time in amounts of $100 or more. The $5,000 I sent to the Fidelity Charitable Gift Fund is irrevocable, so it can only be used for charity. I’ve surpassed my “stretch goal” of $2,000 for 2007. In the process of establishing the fund, I sort of circumvented the most important part, getting that money into the hands of organizations for their use towards their missions. However, I’ve ensured that once I select recipients I will be contributing more than I would have otherwise.

If you’re interested in starting your own philanthropic endeavors through a charitable gift fund, here are some resources to get you started.

Fidelity claims that they now support ACH transfers. I don’t have an account with them, though, so perhaps Flexo can confirm this change…

David: That’s correct. My latest contribution to my charitable gift fund earlier this month was completed via an ACH transfer.

2mil: That’s a valid concern. The way I chose to look at this is in comparison to my income rather than net worth. My monthly net income has been hovering around $5,000, even with large expenses in the second half of 2007. A contribution of $5,000 puts me back about a month (though more if you figure in lost interest or gains) so its effect on my cash flow is not significant at the moment. It’s true, when I decide to put money down for a house, I will have $5,000 less than I would have otherwise (offset minimally by the charitable gift tax deduction), but I still think it was the right move.

By the time I’m ready to buy a house — who knows when I’ll be settling down — I should have enough cash that $5,000 won’t make too much of a difference. I could end up regretting it and missing the $5,000, but if I do, you’ll read about it here.

Hey Flexo,
I really admire this move on your part!

However, let me play devils advocate for a minute — if you contributed what appears to me to be a sizable amount – about 4% of your existing net worth (~$5,000) to this chartiable gift fund, how does that affect your personal financial security? Do you seeing this impacting future plans (ie saving for a house? retiring early?, dealing with emergencies, etc)

I’m in debt, 20,000 over a student loan which has defaulted several time’s. I didn’t get the education that I needed, for a career in welding and blueprint reading. So i can’t get a job in this field and would like to go back to school for psychology so i can help people who are addicted to drug’s and or alcohol and help them make a change in their lives. Someone please help.
Sincerely, Jason..

I think this is a great idea! I might do this next year, gives you a lot more flexibility.

To teach our kids about charitable giving priorities, we bought them Give Cards this year.

They are really enjoying discussing with each other the changes they can make with the amount they give (10% of the card).

Bob: It’s good to hear from someone who has this account. Thanks for clarifying/correcting the fee I listed above; I’ve updated the article to include the correct amount. I should also note the fee percentages for the Fidelity account decrease as your account balances grow. They’re outlined here. Thanks also for bringing up the issue of naming a successor.

I’ve had an account with Fidelity for about a year now, and so far am pleased. My giving consists almost exclusively to my church.

One correction, the annual fee charged by Fidelity is $100 or 0.60% (not 0.06%) – whichever is greater. The underlying expenses charged by each fund are included in this calculation. Thus, if your balance is $50,000 and the underlying expense ratio of your chosen funds is 0.7%, you’d implicitly incur $350 of fees throughout the year and thus incur no explicit line item expense on your statement. Similarly, if you invested $10,000 and the underlying expense is 0.3% ($30) – you’d be billed an additional $70 on your statement once per year. For me, I contributed about $10k in Feb. ’07 and saw a $19.31 “Annual Administrative Adjustment” on my June statement. This fee was pro-rated given my account had only been open a couple months. Since I’ve donated roughly half that balance, I’d estimated the fee charged this coming June will be around $75.

Some would say that’s expensive, but the tax savings outweigh the cost significantly, not to mention the convenience factor involved in setting up a recurring gift that Fidelity automatically mails the the recipient – no work required by me. Also worth considering is all gains on assets invested in the fund are tax free, given they’re not technically your assets any longer; although you’re got exclusive discretion – to 401c3 organizations – to distribute the proceeds.

It’s also worth mentioning the importance of designating a successor. Similar to a beneficiary, the successor will “inherit” your control of where the assets are distributed. Without a successor, the assets are absorbed by the gift fund and allocated as deemed appropriate by the board of trustees. I’m sure they’re fine folks, but I don’t want a bunch of wall-streeters giving away my donation. At this time, I have a family member as primary successor, with my church as a contingent successor.

Red: You only get to deduct the value of your initial contribution into the fund. If you donate securities, you don’t have to include the gains as part of your income, so that is a benefit. Any further gains on the assets once held by the fund no longer belong to you, so you won’t be taxed on that. Once the assets are held by the fund, you won’t get any more deductions, even when you grant a portion of what’s held in the fund (initial contribution or gains). So yes, the gains are just bonus.

I’m confused. So when you do donate the money, do you get to deduct the gains as well? I thought that was the point of donating appreciated assets.

With this, it looks like the donation has already been made and deducted, so the gains are just bonus.

Great idea. We give directly to the salvation army and our local church. Both have proven to do great things with the money and are highly efficient with the money raised.