Advertiser Disclosure This article/post contains references to products or services from one or more of our advertisers or partners. We may receive compensation when you click on links to those products or services.
Written by Smithee
Last updated on July 23, 2019 Comments: 14

We all have power meters attached to the buildings in which we live, and the little needle keeps spinning around and around, ad nauseum, at least until solar panels become affordable. I recently read a story of a family who managed to install solar panels, and while that would normally have cost over $20,000, with various national and state rebate programs, they only spent $8,000.

We’re customers of Green Mountain Energy here in Dallas, so our bill payments go toward producing more renewable energy (see the big bathtub analogy for more on how this works). But the hardware is operated by a company called Oncor, which has decided it’s time to upgrade our power meters to be smarter. Oncor worked through some calculations (Surcharge Analysis PDF) and figured that the best way to install them would be to charge the average customer $2.12. Every month. For eleven years.

Within the last month, a hundred grants were given out to companies making improvements to power meters. The company in our area was not one of them. So residents of DFW are likely stuck with the fee.

On their FAQ about the Advanced Meters, Oncor made this suggestion for dealing with the extra $2.12 per month:

How can you offset this fee? Just replace a 100W light bulb with an Energy Star CFL light bulb and you could save more than $2.30 a month.

That’s cute, and likely true, but I don’t believe we’re still using any of the old style bulbs at our house.

This entire scenario of being charged over an eleven-year period for something that won’t be available to everyone until 2012 would be supremely depressing, were it not for the fact that I’m a big data nerd. I love efficiency, and you can’t improve efficiency unless you know exactly what is being wasted. A smart meter will do that for me. 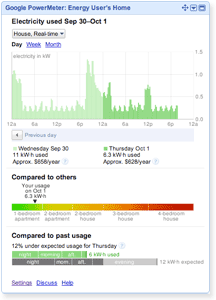 But what’s depressing again is that I could have this right now, for only $200. The Energy Detective (TED) Series 5000 is a device that attaches to the power control panel on the inside of your house, rather than the outside. Other than that, it does all the same stuff: analyze your power usage in real-time, and over regular intervals, then adjust your behavior accordingly.

I’d be excited to get a TED set up in my house, then walk around unplugging one thing at a time, finding the major offenders, maybe put some devices on a schedule; or find out exactly how much we’d save by keeping the house, say, 2 degrees warmer. Those are just a couple of examples. For all I know, more energy is being wasted when two particular devices are running together for one hour than by running both separately for one hour each. Like I said, I’m a big data nerd.

I’d be very interested to hear your story of using a smart meter. Has anybody had the pleasure, yet?

< Previous $50 Bonus for New Prosper Lenders
Next > I Will Teach You to Be Rich, a Six-Week Boot Camp With Ramit Sethi

Don’t know much about the smart meter but the deal seems good. It would be nice if these meters are available in our country. The citizens here would really love to see a reduction in energy bills.

You have to keep in mind that the $291.72 is all in today's dollars, so it will be worth less in 11 years. Also, you are paying the labor costs for installation and the interest that the power company is paying on this money as they try to pay off the loan they will get to buy the meters.

You have to keep in mind that the $291.72 is all in today’s dollars, so it will be worth less in 11 years. Also, you are paying the labor costs for installation and the interest that the power company is paying on this money as they try to pay off the loan they will get to buy the meters.

Here in New Jersey, for a house with a $100 per month electricity bill prior to solar panel conversion, it would take almost 14 years for you to earn back your principal through energy cost savings (assuming the system's cost is $8,000) if you use the system to provide 50% of your energy usage. (And it's doubtful that's a realistic price here.) If you want to compare, with a savings account you never lost your principal in the first place, *and* you earned interest. In other words, you break even at 14 years with solar panels (unless you sell them) but you come out ahead with a savings account.

I think we both agree that if you have the money to spend solar panels are worth considering, but the fact that a product might save you more than you earn in a savings account right now doesn't make it an automatic “yes.”

I'm not sure about that. $8,000 invested in a savings account returning 0.75% (pretty typical for the “big banks”) returns about $60 in a year. I think solar panels pay higher returns than that!

Of course, so would some stocks, corp bonds, and other investments. In this low-yield climate, and with high tax subsidies, solar panels might not be a bad choice. (Of course, that assumes you have no high-interest debt and a well-funded emergency fund.)

I think it's fair to say that our regular readers have their financial houses in order much better than I do.

I actually live in Dallas too and use Green Mountain Energy. I also noticed that Oncor just installed these new meters at my apartment complex (went from old analog style to new digital things.) Do you know if this “smart” data is available for me to look at now?

I wonder how much interest you'll all be paying to stretch that over 11 years. I once lived in an apartment complex that not only had us pay the water bill (the water bill was paid by the complex and then billed to all of us based on square footage and number of residents in the unit), which isn't inherently unfair, but the rub was that we got charged $3 bucks or so a month for the service of being billed. That was all so the complex could avoid raising the rent to cover the water bill. This sounds like a similar situation.