The Problems Investors Should Have With the Wisdom of Crowds

Which rule applies to investing: the wisdom of crowds or herd mentality?

According to James Surowiecki, author of The Wisdom of Crowds, all you need in order to make good decisions — good investing decisions being a subset of all good decisions — is a diverse, independent, decentralized, and aggregated crowd to follow. Let the mob mentality, or the most intelligent in that community, do the work and blindly follow. The theory of crowd wisdom will surely lift the value of your investments.

Even if this theory is correct, it’s difficult for everyday investors to follow in practice for a number of reasons.

1. Hype masks true information. Mass media will occasionally provide information about the most diverse, independent, decentralized, and aggregated slice of the crowd, but that information is usually uninteresting to the mass audience. In a culture where the transmission of information relies on the ability to sell advertising space, ratings rule over information. The media would much rather tell a story about celebrities forced into foreclosure than one about today’s safe real estate investments.

2. Personal bias. The most extreme form of this is the penny-stock spam email you probably receive just about every day. This scam is straightforward: the perpetrator buys cheap stock in some obscure company and sends out millions of email messages. The email messages informs people who may or may not know better that the stock is guaranteed to soar and instructs them to buy now. Even a one percent response rate is enough activity to buoy the stock for the perpetrators, whi will quickly dump their holdings, leaving the fallen stock price for the suckers who bought into the scheme.

On the more reasonable side, stock brokers have their own personal interests in mind and are driven by the promise of commissions and fees. Even some journalists with close ties to financial industry have much to gain by promoting investments or insurance policies that they might not otherwise to help their friends. Investment companies have highly-paid teams of marketers to help write advice-giving articles for corporate rather than fiduciary interests.

So whose information do you trust? 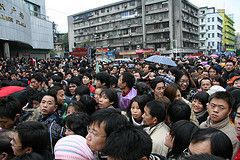 3. Delay of information. Warren Buffett is one of the greatest investors of all time, there’s no doubt about that. It’s tempting to simply follow Buffett’s moves and decisions — albeit on a smaller scale — because he clearly knows what he is doing. The problem that I’ve found is that the public doesn’t hear about the details of his investing transactions until long after they’ve occurred. If you’re following Buffett’s moves three to six months after he’s made his decisions, then you’re missing the benefits that he has been enjoying. In fact, if Buffett were to buy into an investment and sell out of that same investment within a small time frame, you may even be the sucker buying Buffett’s sold shares.

One person does not make a crowd, even if it is Warren Buffett. Consider the collection of all high-level corporate executives, large university endowments, and all their investment managers. Again, you won’t hear of their investing decisions until well after these decisions have been made. It’s almost impossible to benefit from the wisdom of this particular crowd unless you’re able to follow their investments in real time.

Rather than looking for wisdom by following the perceived crowd, it may pay off to move against the mob. The contrary viewpoint may not always be right, so this particular technique of decision-making comes with its own risks.

Bennett has been promoting his special brand of Financial planning for some time.

I suggest before anyone use his ‘planner’ or follow his advice, they should do some due diligence.

Google “Rob Bennett + Purcellville” or just go to these links:

A site that tracks and comments on his activities. He frequently participates as “Hocus”:
http://www.s152957355.onlinehome.us/cgi-bin/yabb2/YaBB.pl

This is a very important topic, in my view.

Most people do not study investing before putting their money into a Section 401(k) plan. They are counting on the majority to get it right.

But the majority is not independent in its assessments. The majority is heavily influenced by its personal experiences. In times when we have just lived through a major bull, assessments are heaviliy slanted in a pro-stock direction.

I think that The Wisdom of Crowds is pointing at something real. There are times when group wisdom is better than individual wisdom. However, the stock market is the outstanding example of when the group wisdom can lead you wrong.

hey nice site, friend pointed me to this post

As someone who’s been tracking buffett for a while, I’d have to argue that it is actually in your best interests to invest along side him despite the time lag. because, after all, he is a very long term investor. so, your time frame is not dependent on near-term moves, you want long term moves.

additionally, if you really wanted, you could just go and set limit orders for the area around where he was buying to begin with. that way, if it ever trades back to that price range, you’d be essentially buying where he bought anyways.

and, he’s shown time and time again with certain stocks that he buys at certain price ranges. not to mention, he has never really bought something and then sold it only 3-6 months later where you would “end up buying the shares he’s selling”…. that’s not his investment style at all whatsoever. Only instance that comes remotely close to this would be PetroChina PTR where his investment appreciated so much so fast, he felt it had reached fair value and sold to take his profits.

I loved the book Wisdom of Crowds. The problems you outline were covered explicitly in the book; especially the role of mass media and hype. WoC explains that mass media tends to homogenize the crowd and therefore render it useless. The Wisdom comes from having lots of different people, but the mass media turns everyone into a parrot of the talking head and therefore just as stupid as the talking head. WoC even cited an experiment in which stocks were selected by a group with access to media and another without. The group with media access, and presumably better information, actually did worse because they lacked diversity.

You are right that this is a problem, but the book listed it as such. There isn’t a good way to access this crowd wisdom as an individual that I know of — as you conclude. Interesting trivia but none too useful for me and you!

Thanks for an insightful and well though out article. I personally like the comfort of a crowd, but know that the real reward is in the risk!

Although I agree with some of these assertions, I must respectfully disagree with how they tie into Surowiecki’s Wisdom of Crowds idea. To address your points:

1) It is true that the mass media will tend to promote more pop-culture and sensational stories whose headlines can be made attractive, rather than concentrate on what is important to the consumer. But for every 10 people who just skim those headlines, you have a couple people who assume they can get an edge by sifting through it all to find relevant data, and will trade on those. People see opportunities in other peoples’ laziness (for lack of a better word).

2) Again, although some people will unfortunately be scammed by the penny-stock spams, others will foresee a scam and short these stocks, or ignore them altogether. Even when journalists tote a certain stock (although it could cost them their job), many investors will want to take a contrarian viewpoint, assuming everyone else is buying this stock, they will try selling. Managers will hire marketing companies for their stock, but so will their competitors (as happens will all goods and services). Again, according to Surowiecki, the end value of the stock will reflect reality.

3) In response to the information delay we assume that, thanks to the internet and 24 hour news coverage, news is available as it becomes public. If it is not public, it cannot be traded on (since this would constitute insider trading). Although Warren Buffett can be seen as an anomaly, since he can move markets himself, in theory we can assume that he is just very thorough (and he actually invests in the companies and participates in their corporate structure, rather than just buying stock).

Most of the time, at least from what I’ve seen, the crowd tends to be right. So if you bet with the crowd you will win small, but more consistently. If you bet against the crowd you will not win very often, but when you do you can win big (assuming better odds). The devil, as always, is in the details.