Using Fame to Promote an Issue: A Reponsibility or Uncouth?

You’ve seen it before. Perhaps you’re watching the Academy Awards and expecting the winner of Best Supporting Access to give a quick acceptance speech thanking her cast, director, crew, and family, but perhaps she takes more time to pontificate about human rights, war, or politics. Most people I know groan when yet another entertainment superstar shares his opinion about issues unrelated to acting, singing or dancing. But skills in entertainment may not always preclude intelligence or sincerity.

Tom Hanks knew this when he published his stump video for Barack Obama on Youtube. He says sarcastically, “As an official celebrity, I know my endorsement has just made your mind up for you.” (Hanks managed to slip into his endorsement a mention of George Washington’s transference of power to John Adams, an event recently depicted in the John Adams miniseries he recently produced for HBO, but perhaps that is beside the point.) 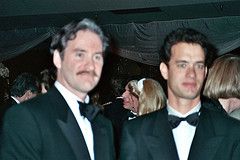 I like Tom Hanks’ approach. By posting a Youtube video, he is not forcing anyone to listen to his message; those who are interested can seek it out. Additionally, I find Tom Hanks to appear to be an intelligent figure in entertainment, always making smart and challenging choices in his own career. I would then extrapolate and assume that he is likely just as intelligent with other decisions as well. But his argument in favor of any presidential candidate is only as persuasive to me as I want it to be.

This is just a recent example, but there is no doubt that it is common for celebrities to use their voice and popularity to bring awareness to a human rights or political cause. Perhaps the type of popularity in which individuals have the ability to reach an audience of millions instills responsibility or desire to reach people in a way that not many others can. Anyone in their place who cares about an issue would regret not bringing awareness before they no longer have the ears of a wide audience if given the fleeting chance. 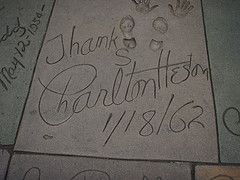 I believe that anyone with the ability to communicate to millions of people and touch so many lives has the responsibility to raise awareness to important issues. However, the most uncouth outbursts at an inappropriate time (think Michael Moore at the Oscars blasting President Bush) make the celebrity seem like a jerk for using their status to spread their message and take attention away from *the issue* and place it on *the celebrity.* Don’t forget that celebrities all along the political spectrum use their status for awareness, including Charlton Heston with his From My Cold, Dead Hands call as chairman of the National Rifle Association.

Should celebrities just shut up and entertain us, or does great responsibility follow great popularity? Is it right for some celebrities but not others, or is it the timing or situation that makes the message acceptable to hear? Or do you believe only the celebrities who agree with you should have the opportunity to speak out for issues that they find important?

< Previous Is a CFP Certification Necessary When Choosing a Planner?
Next > Gas Stations' Profits Hurting: Should Congress Intervene?

I think they should all just shut up. I’ve never listened to any of them and find it irritating that they think they have the right to force their views on me.

Bob: I don’t think that analogy holds up. You have a contract to provide engineering services in return for $30 an hour. When you buy a concert ticket, the performer is not held to any contract with you. In return for your $60, the show promoter is guaranteeing you a seat from 8:00 pm to 11:00 pm (or whatever)… and that’s it. The performer’s contract is with the show promoter and the promoter’s contract is with the venue…

But you have expectations for what your concert experience should be, and performers shouldn’t stray too far from what their ticket holders want unless they’re trying to redefine their image and find a new audience.

What about at awards shows? If you watch on television, you’re not paying anyone anything.

@Brian: “If they want to talk about their political beliefs that annoy you, too bad. You aren’t “forced” to be there, you paid them $60 to be there and you can leave at any time.”

If my company pays me $30 for an hour of engineering, I had darn well better be engineering. They’re not paying me to state my political views. If I did, I would quickly be finding myself another job. The same thing should apply to an entertainer.

There should be a time and place for everything.

If we are at a function and the someone who is giving a speech goes off topic and starts blabbing about his/her favourite issue…then we are entitled to think they are uncouth.

If the function is about the subject concerned, and the famous guy/gal talks their heads off….good for them.

I like Brian’s point. Even in kindergarten you learn that some people are just crazy and you don’t bother listening to them. I think Charlton Heston was a bit off his rocker since….well since ever. So I just ignore him. If people don’t like Michael Moore (I really have no opinion about him) then they can do the same.

If a celebrity can fit their issue into the 30 second speech at the Oscars (without going over) then fine. If they want to make a website or youtube video, ok. They’re the same as other people…who also have the right to try to promote their opinions.

After all, people aren’t just what they do for a living.

I don’t see it as a responsibility, but it is an exercise of their freedom of speech if they choose to do so.
Castocreations, if you paid to see The Dixie Chicks perform, and if they don’t play your favorite song, too bad. If they decide to skip all their hits and spend 115 minutes on a freeform improvised jazz cello solo that you hate, too bad. If they want to talk about their political beliefs that annoy you, too bad. You aren’t “forced” to be there, you paid them $60 to be there and you can leave at any time.

This goes both ways. The Dixie Chicks (who I’m assuming you’re referencing) took a risk by vocally stating opinions that went against their typical fanbase. People could’ve gotten angry and not paid to see them anymore, which some did…but they went on to win a bunch of CMT awards, Grammys, and still sell tickets, so their risk paid off. They challenged the stereotype that being patriotic meant blindly following your President, and succeeded.

“Celebrities” get that way because we buy their music, millions of housewives buy US Weekly, and millions of us will never forget the first time we saw “Big”, “Saving Private Ryan”, “Band of Brothers”, or “Charlie Wilson’s War”. If somebody ‘abuses’ their celebrity status while exercising their constitutional right, ignore them. Change the channel. Don’t go to their concert. Use *your* freedom to avoid them, and everyone stays happy.

I ignore Bill O’Reilly because I think he’s a d***he. I ignore Paris Hilton because I think she’s useless. I ignore Tom Cruise because he’s…well, he’s crazy, and he’s Tom Cruise. One of the most important lessons I learned in kindergarten is that people can only annoy you if you pay attention to them.

“Or do you believe only the celebrities who agree with you should have the opportunity to speak out for issues that they find important?”

I think most celebrities, actors, and singers are clueless about the ‘real’ world and I could care less what they say. Actions speak louder than words. One person who has actually “earned” the right to her opinion having meaning is Angelina Jolie. Michael Moore is just a blowhard idiot.

As for presidential nominations. I could care less who Tom Hanks wants. His life is so foreign from mine that he could live on another planet. So his “needs” don’t really jive with what I want in a president.

I don’t really care what celebrities say as long as they do it at the right time. If I pay to attend a music concert I don’t want to be forced to listen to their political views. Shut Up and Sing (as Laura Ingrim’s book so eloquently states).

Anyone can make personal decision on how to use their resources. Celebreties are no different. But, my opinion of them is not high, so I don’t even follow anyone of them. I certainly don’t listen to what they have to say.