As I’ve mentioned recently, my maternal grandmother passed away a few days ago, my second of two grandmothers to pass away in the past few weeks. A few years ago, she moved out to California to be cared for by my mother and brother who had also moved out to the west coast several years earlier. When my grandmother entered hospice care, I mentioned to my boss that I would be taking a few days off for the funeral with short notice, as I intended to travel to California to be with my family. On Tuesday last week, my mother called me to share the news while I was getting ready to leave work for the day.

I immediately began searching for a round-trip flight that would take me from the New York City or Philadelphia area to the Los Angeles area on Wednesday and back over the weekend. My primary tool for searching for flights online is SideStep, but I also look at websites for individual airlines. Not finding anything and wanting to leave the office to continue searching at home, I notified my boss that I would be out for the remainder of the week. 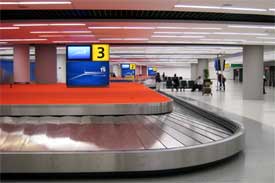 The concierge who answered the phone could not have been less helpful. To research flights, a travel specialist needs to be on call, and at the time I called, they had none. The best they could do is take my flight requirements and get back to me within 24 to 48 hours, and the impression I took away from the call is that all travel requests require this excessive turnaround time. Since this was Tuesday evening and I needed to travel Wednesday, this did not meet my needs. A regular travel agent would have been able to take care of my request immediately.

I thanked the representative for her help but I spent an hour or so doing my own research and booking the flight when I arrived home. I determined that bereavement fares, last-minute rates designed for people who need to fly in situations like mine, do no longer exist at most airlines. When they do, the rate is a five or ten percent discount off the full coach fare, not the non-refundable economy fare. I would be better off with the economy rate. I spent more than I would have liked, but the fare I chose was decent for a non-stop flight considering the circumstances.

I’m pleased I was able to be with my family in a difficult time, but I would have liked the process to be smoother, and the concierge service let me down.

< Previous The Album's Last Gasp
Next > How to Have $50 Million Covered By FDIC: CDARS

I think it’s best to use these services when you’re not price sensitive.

This is interesting. Would any of you out there who are choosing not to spend but rather are paying off debt give me a ring or email me please. I am a reporter at the LA Times and am on deadline today 9/8 with a story about plunging consumer debt numbers.. 1 800 LATIMES ext 75260 or 213 237 5260. Thank you.

I also sympathize a bit with the airline and credit card companies, us consumers
are not exactly loyal, and if we can save a nickle by jumping to another service provider, we do
at the drop of a hat. But where did we learn that? From business. From what Flexo said, it
was Visa that pushed this ‘concierge’ service, promising, at least, a helpful service, and
delivering nothing.

I tried the bereavement fares a few years ago and found they don’t really exist. The airlines (at the time anyway) didn’t try to rip us off, but didn’t offer a lot of other help either.

In a way, I can’t blame them. Verification is a pain and asking for some kind of proof just seems low. And the bottom line is, well, the bottom line. Customers show little or no loyalty and are always after the lowest fare. Why should they be loyal to us when we aren’t loyal to them? Sad, but true.

Sorry for your loss.

Flexo: First and foremost our condolences are with you and your family!

Years ago I also had to travel to California for a funeral. When I called the airlines they offered a bereavement fare of $1600. Seems to me that if an airline would cater to people in desperate times that loyalty would be their reward.

The airlines are the ones that made “customer focus” the in thing and now they are the farthest from it! I’ve been a 1K traveler for over 12 years I can say with authority that they are all lame!

I’m sorry. The Visa concierge service let you down? Why does that not surprise me? If i were you I wouldn’t expect that service to be useful for immediate or long term travel. Waste of money.

When my grandfather died and his funeral occurred, I could not justify the $1300 round-trip Delta wanted for the nearest airport (CVG), and no one in my family was able to make the 4+hour round-trip to IND, which would have been slightly cheaper.

I ended up not going and made me peace with him in other ways. I don’t really regret not being there, but it is unfortunate that the airlines don’t really help. Then again, verifying funeral dates, times, and relations is a lot of manual work and not really worth it for them.

It’s true, customer service above and beyond the call of duty is almost never worthwhile for companies. Many airlines used to make that type of service a way of doing business, but no longer.