Fidelity Study Finds Millennials are Moving Back Home in Droves 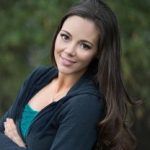 Ah, millennials. They are the first generation to grow up with iPhones, FaceTime, and GPS apps. Most of their banking is done online and, thanks to Amazon, the majority of web purchases arrive at their doorstep within 2 business days. They hit the generational jackpot when it comes to convenience and ease, it would seem.

And now, according to a new study from Fidelity, they are also very likely to still be receiving financial help from their parents, even if they’re “out on their own.”

The newest study, published today, was conducted between July and August 2016, and included responses from 305 Millennials (aged 25 to 35). They had an average salary of $68,000 and an average total savings of $67,000. Of these 305 young adult respondents, 48 percent had a 401(k) and 28 percent had an IRA. Also, note that Millennials as a whole also have an average of over $37,000 in student loan debt. (They do hold less credit card debt than the generations before them, though.)

A very interesting find of the study, aside from their financial allocation habits, was the increase in their support system. From the participants’ responses, the study found that the Millennial generation is cutting their parents’ financial cord much less, and much later, than in years past.

Nearly half of these Millennials (47 percent) own up to letting mom and dad pay for a number of things since they’ve been on their own. Some of these costs include family-type expenses – like cell phone plans, streaming services, subscriptions, and insurance plans. They may also include more specific contributions, like car payments and grocery bills. 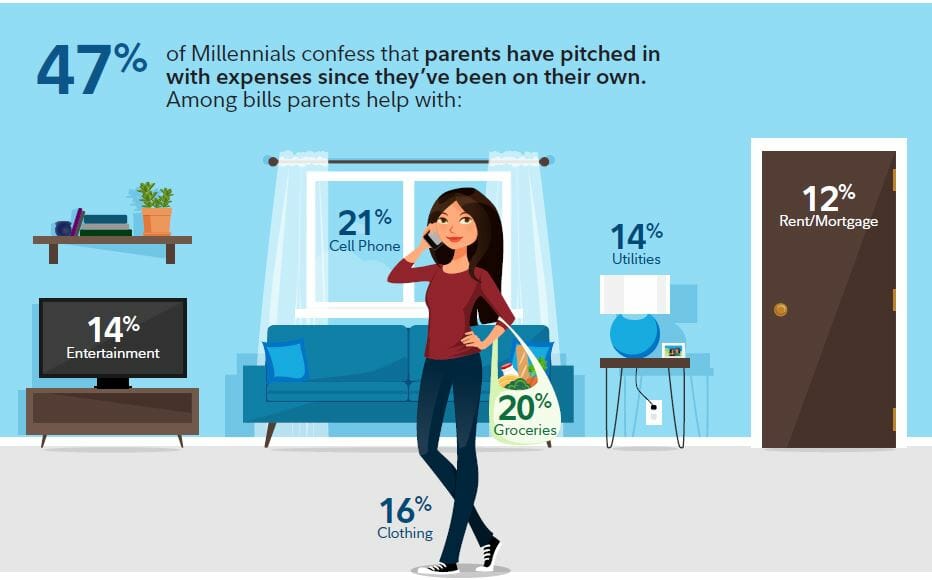 More notable than budget help, though, is the fact that there’s been an uptick in adult kids actually moving back in with the ‘rents.

This new study found that 21 percent of Millennials report living at home, which is up from the 14 percent found in 2014’s study. While some of these kids never left, a good number of them consciously chose to move back home after being in the real world for a few years. Of course, 67 percent of respondents also said that it’s more acceptable now than ever for adult children to move back home with their parents, so perhaps that’s one encouraging factor.

Another 66 percent of Millennials said that they live outside of their parents’ home and cover all of their own expenses. Of those truly independent folks, though, 25 percent of them admit to having moved back in with their parents at some point for financial reasons. (Only 12 percent of Gen X respondents said they had done the same, along with 9 percent of the baby boomers.)

So, what are these young adults doing with all of the money? If they aren’t spending on rent or their own cell phone plans, where is it going? Turns out, they’re saving most of it!

They Are Saving More Than Their Older Counterparts

A surprising 85 percent of Millennials said that they have some form of savings. This is up from the 77 percent who said the same in 2014’s study.

Emergency funds are at the financial forefront, as 59 percent have money saved up for serious, unexpected costs. In fact, not only do a large number of them have emergency money tucked away, but they also, on average, have more money saved up than the older generations. Millennials have a whopping $9,100 tucked away on average. They say this amount should cover about six and a half months of their living expenses. Gen Xers, on the other hand, only have $8,700 and Boomers? A mere $7,100.

Looking further ahead, the majority of Millennials are also saving for retirement. When the study was conducted in 2014, 51 percent of respondents said that they had a retirement savings account. This year’s study, however, found that number had jumped up to a solid 60 percent.

Sure, this generation is much younger and admits that retirement is still far, far away. But the actual number of them saving for their golden years is still comparable to older generations. Of Gen Xers, for example, 61 percent are saving for retirement, along with 67% of baby boomers.

Sure, the Millennials seem to be doing a great job at tucking money away. Perhaps that has to do with their parents’ willingness, and ability, to help out. I would imagine this makes it much easier to put cash in a savings account. There’s extra money when mom and dad are covering auto insurance bills each month or you’re riding their cell phone plan coattails. But hey, to each his own.

There is one problem, though. Young adults don’t seem to be saving their money as smart as they could.

The vast majority of Millennials are saving their emergency fund in a traditional savings account. There, it’s likely to earn less than 0.25 percent in interest. (According to Bankrate, in fact, the average money market and savings account APY (as of 10/14/16) has been 0.11% for 22 consecutive weeks.) Of course, this isn’t going to accumulate the same return as a brokerage or investment account.

Speaking of, only 8 percent of Millennials are keeping their money in one of those types of accounts, compared to 11 percent of Gen Xers or 23 percent of baby boomers.

What Are They Focusing on Instead?

Many of these 25-35 year olds are more conservative than they should be when it comes to their money. As a result, they are missing out on potential returns.

Though 63 percent have investment accounts, only 9 percent of Millennials would use “investor” to describe themselves. Instead, 46 percent would identify with being a “saver” and 44 percent would instead say they’re a “spender.”

They’re tucking cash away in IRAs (28 percent) and 401(k)s (48 percent), along with the emergency funds mentioned above. Accumulating more savings is a priority to 44 percent of them, as is building an emergency fund (also 44 percent). But this younger generation is also very concerned about the here and now.

So, why are Millennials moving in with their parents or taking advantage of mom and dad’s financial help? Many of them say it’s in order to afford just their essential living expenses. In fact, 38 percent cite this as their reason. A whopping 33 percent are working to reduce their credit card debt. Another 30 percent of them are trying to pay off their often-crippling student loans. They aren’t racking up the high credit card debt that their older counterparts accumulated. Instead, they seem to be very worried about financial security.

Fidelity asked them whether money concerns keep them up at night. One-quarter of respondents said that yes, they worry “all the time” about their financial future. (Interestingly enough, this is about the same percentage of Gen Xers and baby boomers who said the same thing.) Another 17 percent said that they worry a few times a week or more.

So, What Does This All Mean?

It’s obvious to the younger generation – at least, to those who are paying attention – that their financial future is less secure than generations past. They have seen a number of financial crises in their lifetime, which may have impacted how they view money, debt, and the importance of saving for the future.

They have heard talks of Social Security running out. They’ve seen high unemployment numbers in recent years, and witnessed a house market crash. College educations, which were supposed to guarantee their careers, have become more less affordable. A degree also doesn’t get them as far in the working world as promised. Our country is in record debt, as are its citizens. Personally, I think Millennials are right to be a little spooked. I’m glad to see that we are shifting to financially-conscious young adults, even if moving back home is what’s allowing that to be possible.

As long as our up-and-coming generations are getting concerned with their money, their financial futures, and the need to stay out of debt, our country has a chance to shift its mindset. Perhaps something else will change within our society that can support Millennials’ penny-pinching. Until then, this seems to be the logical (and more readily acceptable) option.

Parents, don’t downsize your home just yet – the nest might not stay empty for long!

< Previous An Overview of The CFPB Mortgage Protection Rules
Next > Think Only the Rich Have Accounts at Goldman Sachs? Think Again