How to Hedge Against Gasoline Price Increases

When gasoline prices at the pump increased to the point where the cost was a major news item engendering backlash among the public, oil companies were sporting big profits. Consumers reacted by buying more fuel-efficient cars and traveling less, but there is another approach for investors — an approach that mimics what commodities and hedge fund traders do. There are a few suggested approaches, but some work better than others.

One approach is to simply buy stock in the companies that are increasing prices to hedge against cost increases. The theory is that if prices of consumable goods increase to drive profits for the company, owning part of the company will turn those higher expenses to investment returns.

A quick check of gas price data and Exxon Mobil’s performance shoes that stock prices don’t always correlate with an increase in gas prices, but Exxon Mobil did provide dividends to investors during the last major period of gas price increases, from December 2008 to now. Investors during this time would have received $5 per share in dividends. If you estimate you’ve paid $5,000 more in total gasoline costs since December 2008 than you would have if gas had remained at $1.70 per gallon — and this is an assumption I’ll continue to use here — it would have taken 1,000 shares of XOM to earn that back in dividends. Those 1,000 shares would have cost a total of $80,000 in December 2008 and they’d be worth only $72,000 today. 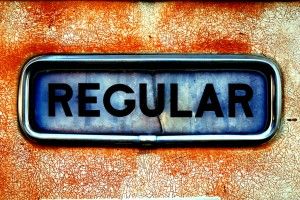 This strategy would not have been very efficient. What about industry ETFs? The United States oil ETF, USO, would have seen performance not quite as bad as XOM over this period, but there would be no dividends. Investing directly in companies that profit from higher prices does not seem to be a winning strategy.

A bunch better choice would be an ETF that tracks gas prices closely, regardless of the stock performance of the companies involved with delivering gas to the consumer. Over this time period from December 2008 to today, UGA, an ETF that takes this approached, has increased 130%. Gas prices increased from about $1.70 to about $3.60 per gallon, or an increase of 111%. This seems to be the better approach for hedging against gasoline price increases. From an absolute dollar perspective, earning back the $5,000 in additional gasoline expense over this period would have required an initial investment of $3,850, a more reasonable down payment.

There are other ways to hedge gas prices, like selling put options on UGA. If you’re willing to gamble that UGA will trade at a certain minimum price on a certain day in the future, you can take a profit to help offset your gasoline expenses. If you take that bet and UGA is not trading at that price, you could lose money on the trade, but you’d be paying less at the pump, so you’ve saved money anyway. I think buying the ETF is a better idea for most investors than dealing with options.

Another option, in combination with investing, is to ensure you’re getting the best prices for the gasoline you buy. It doesn’t make too much sense to drive out of your way to get to the isolated station with the lowest price, but be aware of your options. Find the best gas credit card for you and use it to earn cash back, but be wary of stations that charge different prices depending on whether you use cash or credit.

Right now, gas prices may not be the biggest financial concern for a family. The public now expects high prices despite not too long ago bemoaning when prices climbed above $1 per gallon. Transportation can be a significant expense for a family, though, particularly in locations where the career economy is based mostly on commutation, like New Jersey and California.

I use the lowest price store in our city, which is the WalMart, but a while back when a new Kroger opened there was a price war on for a few weeks. I also combine errands and try to make no unnecessary runs. The last thing that I do is try to take advantage of deals like the Publix deal or CVS deal where I buy a certain amount and get a free or discounted gas card. My new car, while not a smaller car, gets better gas mileage.

There’s also a gadget out there called the Fuel Efficiency Adviser, that you mount to the dashboard of your car that tells you everything from instant miles per gallon to manifold pressure. It’s designed to give you all the data you would need to adjust your driving habits accordingly to save the most gas. He doesn’t know it yet, but my hubby’s getting one for Christmas this year. 😉

I like the idea of buying stock in oil companies or looking at oil industry ETFs but a good way of saving some money on gas is buying gasoline from sam’s club or costco. You can save between 5-10 cents buying gas from the warehouse stores. The problem I have with stop & shop programs is that you are buying a lot of items from grocery stores just to save a few cents at the gas pump, it’s basically a trade off.

If you don’t frequent S&S yup. In our family’s case we do.

I like that you mentioned selling puts on UGA. I’ve been doing it for years. Presently I have a sold Oct 47 put out there. Basically, every few months, I sell an out of the money put and collect a few hundred bucks. Since most options expire worthless, this has invariably worked out in my favor. In the event gas prices drop precipitously, I’ve collected the time premium on the option and now I’m paying lower gas prices!

I’ve written in the past about using discounted gift cards like cash, to pay for everyday needs. It’s possible to set an alert for whatever card you like, including gas-station cards. They come and go VERY quickly, so be ready to pounce.
Some supermarkets have gas stations attached, so set an alert for those, too.
The discount isn’t much, usually around 3%. But every little bit helps.

Another way not mentioned is via credit cards and getting points for gas. I recently wrote about the Stop and Shop Gas rewards:

My ownership of XOM goes back to 2003 so in my case I’m ahead, but in the situation you describe I would not. I pick up more XOM when I think the stock is cheap.

MLPs are another alternative that are based upon the flow of fuel, not the price of it.

Again none are perfect hedge though.

I did mention cash back from gas credit cards in the article, but just a sentence because I covered it more in the article that I linked to. Considering this and Donna’s comment below, I might do better by adding a little more to this article.

Keep in mind the stop & shop program isn’t a credit card though.

You spend money at their store and build up points. Each 100 points ($100) takes $0.10 off each gallon per fill up. Up to $2.20/gallon. Plus you can get extra points every month by purchasing specific items. So this could be better than 3%-5% discount a gas credit card offers. At least for someone like me who is married with three kids you eat us out of house and home. Someone single who is, definitely no.

I’m a big fan of planning for errands and trips so you can limit the amount of driving you do. Also, taking public transportation is a great way to save money.