I’ve been investing in a 401(k) retirement account since I joined the ranks of the corporate employed seven years ago. I started with a small percentage of my income, just enough to take advantage of the full company match. As my income increased, I diverted a larger percentage to the 401(k) with the hopes of retiring with a sizable nest egg decades later. I’m at the point now where I am contributing the full amount allowed by law.

This plan has worked well for a while. But like most people in similar situations, my 401(k) suffered damage over the past year or two. I figured that over the course of my career, I’d hit a recession at some point, and I suppose I am lucky that I am not forced to retire and begin drawing income right now, with the account value depleted. 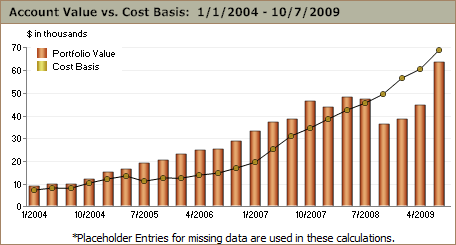 I continued to invest in my 401(k) every other week. Even with increased investments, my account has not caught up to my cost basis. The Employee Benefit Research Institute and the Investment Company Institute recently released a report that shows that many investors have been able to bring their 401(k) account balances above the level recorded at the beginning of 2008. I fall into this group, but at the beginning of 2008 my account value was higher than my cost basis. As of today, the total value of my 401(k) is below my cost basis.

In other words, if I had been putting the portion of my paycheck that I had been investing in my 401(k) into a bank account — or even kept cash under my mattress — I would have fared better. So far. The good news is that while I was investing throughout the past few years, I was, I hope, purchasing funds at relative bargain prices. If stock market performance returns to average over a long period of time, I should be in luck; those bargains will pay off.

My 401k made new equity highs this month without me contributing anything in the past year. Thanks to a simple and easy to follow moving average system I moved my entire account into bonds December 2007 and moved back into stocks in June 2009. Wish I could teach the world this system and give them the discipline to follow it.

Look at your total amount contributed plus any employer match. If that amount is less than the market value of your fund then you are ahead, so to speak. I have been in my 401(k) for over 20 years. Even though I took a hit like every one else, my total return is still over 7%. The $amount of my contributions is about half the total value of my fund. Nobody has a mattress that pays that kind of money!
Pay close attention to your asset allocation. A little bit in bond funds and money markets helps cushion the blow from bad stock returns.
Lastly, 401(k)’s are very long term investments. 20 years from now this will barely be a bump in your curve. Remember the crash of ’87?

I got hit pretty hard! I was invested in a fairly aggressive allocation model…

5% in cash, 5% in bonds and the rest in some form of stock mutual funds.

Like you, I also increased my contribution when the market tanked, but I’m still down 10% for the last 3 year.

Flexo, I’ve been listening to your CC podcasts lately and heard you on the PF Hour a couple of weeks ago. Does the loss of 401k contributions lead to your hesitation to quit your day job and move to blogging full time? I can see how losing that opportunity could cause some concern.

Great question, Austin. The 401(k) is definitely a benefit that I’m hesitant to leave behind, as is the relatively inexpensive (for me as an employee) health insurance. There are other tax-deductible investing options I would have as a fully self-employed individual, but I haven’t fully researched these options yet…

Great post. It got me to spend an hour tonight doing the same analysis on my 401-k and my wife’s. I had a feeling the outcome would be similar to Flexo’s – and it was close. Unfortunately, since mine started in 2006 and my wife’s in 2005, we are still just shy of our cost basis. We both had small rollovers in those starting years (me about $3k and her about 10k) so that was the beginning cost basis.

To the point above, I did only count pure contributions out of our checks, plus the employer match. Certainly it would look better without counting the employer match, but I see that match as part of my salary. Ideally, if I weren’t getting the match, my salary should be higher. Either way, it is still my money. And many, many thanks to Neil for reminding me of the tax benefit. I had a moment while doing this where I did the “mattress would have been a better deal” train of thought. Obviously I am still way ahead due to the pre-tax contributions.

So, all in all, a little depressing to see, but it has been nice to see 5 digit gains each of the past quarters. Hopefully all those shares I dollar-cost-averaged into will pay off!

Very happy with my 401k for sure – went from contributing 3% a year to now maxing out 🙂 not always easy when you “own” a home, bit I’ll gladly keep doing it until something forces me not to. At 100% company matches, I’d be an idiot not to! That’s $30k banked away every year…

I don’t know how the cost basis on that graph was calculated, but it may be including any dividends that were reinvested. What you are really interested in (at least what I am interested in) is the amount that was taken out of my paycheck vs. the value of my portfolio. On that basis, you might be doing better that the graph indicated.

Brer: That’s a good point, the cost basis does include reinvested dividends.

Our company switched 401K providers in February of this year, which makes looking at my yearly returns very deceiving. I have about a 40% YTD return. I wish it were only true.

Don’t forget to due to taxes if you kept the money as income the ROI would probably be less that 85% (dependent on marginal tax rate). Even after a 50 year recession you are still ahead vs. cash.

I don’t have a 401K just my own personal Roth IRA I set up but it’s only been one year so can’t really see progressions.

That’s one of the great things about your 401k. You are constantly contributing so you get to see growth in the account value even if the performance isn’t there. You see the account value going up from contributions so people feel good about it. What people don’t always realize is that their account might only be growing because of the contributions which is what helped you get past your highest levels without getting past your cost basis.