How the New AHCA Bill Will Affect Your Healthcare

Advertiser Disclosure This article/post contains references to products or services from one or more of our advertisers or partners. We may receive compensation when you click on links to those products or services.
Written by Michael Pruser
Last updated on July 18, 2018 Comments: 3 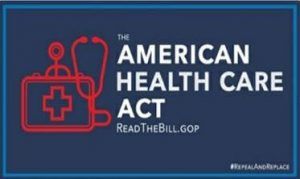 Yesterday, the U.S. House of Representatives narrowly passed the American Health Care Act (or as many are calling it, “Trumpcare”) by a vote of 217 to 213. Initially, it was determined by Republican House leadership that the bill was not strong enough to pass a vote. The discussion appeared to be tabled indefinitely. However, after a few amendments to the bill over the course of the last month, there was enough to satisfy the Republican members of the House to ensure a vote would carry with it a passed bill.

I’m going to try my best to discern fact from fiction, remove the propaganda from both Democrats and Republicans, and tell you exactly what this bill means for your healthcare. Depending on who you talk to, you may be hearing things like “tens of millions of people with pre-existing conditions will lose their healthcare,” or “Obamacare is dead, long live Trumpcare.” If you’re on the outside and haven’t actually read the bill, it’s not easy to figure out who is telling the truth and who is lying (SPOILER: in politics, everyone lies).

So, let’s dive right into what this bill does and doesn’t do, and how it could affect your future healthcare.

This single topic is the one that divides the Republican party more than any other. Under Obamacare, anyone that was sick could purchase health insurance through the federal or state exchange. They could even do so at the same price as a someone who had no pre-existing condition.

The idea behind the increased coverage was that by forcing a mandate, more healthy people would pay for health insurance. Their premiums would cover the cost incurred by insurance companies to cover those that were sick, balancing the scales a bit. This meant that millions of Americans, who previously could not get health insurance at an affordable cost, now could under Obamacare. What happens to these individuals if Trumpcare is signed into law, though?

The answer is: absolutely nothing. Any person currently covered under Obamacare who maintains continuous healthcare coverage (which is defined in this bill has not having lapsed for longer than 63 days) cannot be charged a higher premium because of a pre-existing condition. It doesn’t matter what state you live in, and it doesn’t matter what condition or how many conditions you have. Your insurance will be the same as those that have no pre-existing condition.

Examples of pre-existing conditions under Trumpcare:

So, what is changing about pre-existing conditions? The primary change is for those that do NOT have health insurance–or whose coverage lapses for longer than the 63 day threshold. If these people then do get sick and look to purchase health insurance, it’s going to be expensive.

Federal law will allow for a specific premium increase (right now, 30%) to be charged for each pre-existing condition. Then on top of that, individual states can request a waiver to increase costs for new premiums even further. States must prove that they are requesting a waiver so that they can either lower premiums for everyone OR cover more people as a result of the waiver. In this way, people who choose not to have health insurance and then get sick will no longer be able to buy healthcare at, what I can only define as, an affordable rate.

Under Obamacare, those looking for health insurance could receive government subsidies based on their income. The smaller the amount of income, the more in subsidies.  This allowed the poor to be able to afford healthcare (in some cases, making it free) and ensuring that the rich were not getting benefits from the system. With Trumpcare, however, the subsidies are based on age rather than income level.

Here is a breakdown of the annual tax credits received from Trumpcare:

The amount you see above begins to phase out for those that earn more than $75,000 (or couples that earn $150,000), starting with 10% and going down from there. So, the very wealthy will not receive any government subsidy. However, for example, my family of four (me, my wife, and two children under the age of 4) would receive a total subsidy of $9,000 to pay for health insurance. My current income level means it would not phase out, and as our current health care premiums are $800 a month, the subsidy would be welcomed by my family (and our budget).

Related: How to Save Money on Healthcare Costs

This change in policy would affect the lower class more than anyone else in terms of a negative impact. For some families that are completely covered by Obamcare, they would now owe a portion of their monthly premiums. As a result, the fear from many is that they will no longer be able to make their payments, thus fall into the lapse period and then not have the ability to purchase coverage should they get sick.

All of this said, the change in subsidies from income based to age-based would take effect on January 1st, 2020. It wouldn’t be an immediate impact and would allow families to plan for the changes.

Higher Costs for the Elderly

Under Obamacare, the elderly (ages 55 and above) can currently be charged up to 3x the cost of their premium compared to that of a younger person (under 30). That’s not to say that every plan features this kind of charge, however the option is available to insurers. Under Trumpcare, that charge increases to 5x. Because of the ability for individual states to apply for waivers, there is the potential for them to increase that cost even higher.

Read More: How to Afford Healthcare In Retirement

For this very reason, groups like the AARP have voiced their opposition to this bill, as many seniors would see risings costs as a result. When the first version of this bill (that was not voted on) was scored by the Congressional Budget Office (CBO), the average estimated increase in cost to annual premiums for the elderly was ~$3,200. That amount could be off-set by some of the changes being made to the Medicare portion of healthcare; however, it is expected that most elderly Americans will see a rise in their healthcare costs.

One of the reasons this bill has taken so long to pass the House is that some Republican lawmakers were concerned about high risk pools running out of money. These are the pools that will take care of people with pre-existing conditions, who have a lapse in coverage, and who will require the most funding for their healthcare costs. The current law has included $138 billion in funding for these pools over the course of 10 years to help insurance providers subsidize some of the claims made.

However, while $138 billion sounds like a lot of money, some estimate that the actual amount needed to cover high risk pools is in excess of $300 billion. The Upton Amendment, named after Congressman Fred Upton (R-MI), added an extra $8 billion to this pool, which was enough to get a few additional (and much-needed) votes.

But even though $8 billion sounds like a ton of money, it covers less than you’d think. When getting into the weeds of healthcare for high risk individuals, that money is likely only to cover an additional ~100,000 people.

Under Obamacare in the 2016 tax year, if you decided not to buy healthcare, you would be charged a penalty based on the income you earned. For example, my mother (who refuses to listen to my advice) was charged a $2,300 penalty for not having health insurance. Under Trumpcare, the mandate disappears, and no penalty is charged.

The upside for the young and healthy is that if they choose not to carry insurance, they will no longer have to pay out of pocket for that choice. The downside is that if those same healthy people all of a sudden get sick, their premiums will be much higher should they decide to then buy health insurance. However, even that is not much of a downside because the money saved over the years of not paying for health insurance may still be greater than the amount they need to pay on top of their new health care premiums. So, in the end, they’ll have likely saved more money.

The Obamacare mandate never seemed to provide a great enough incentive to get healthy young people signed up for health insurance. This caused health insurance companies to take in too little revenue while paying too much in health care costs. The result is what you see now. Every day, it seems as if insurers are pulling out of different state markets, reducing the plans available to residents.

The Final Word on Trumpcare Part One

Depending on whether or not you’re a fan of the above changes, I have good or bad news for you. These details discussed are not yet law, and there could be (and likely, will be) significant changes. The bill that passed the House of Representatives probably will not be voted on by the Senate; instead, the Senate will write their own healthcare bill and vote on that (when Republicans feel they have the 51 votes needed to pass).

This doesn’t mean everything you’ve read above won’t happen, but it does mean that the finished Trumpcare product could look substantially different than the one that was just voted on. If the Senate passes a bill significantly different than the one the House just passed, then both houses of Congress will have to get together and compromise on a bill that they both endorse. At that point, the bill hits President Trump’s desk, and I believe the odds are somewhere in the 100% range that it will be signed into law.

There is another possibility, however: the Senate may not be able to create a law that can pass, and when they vote on the House version, it could be struck down.

There are no guarantees as to how or when the finished version of Trumpcare will take effect, but many expect something to be completed before the end of August. If that’s the case, millions of Americans will soon be shopping for new healthcare plans. When that happens, we’ll do our best to keep you apprised of the different policy options.

< Previous Will the Fed's Rate Increase Cost You More Money?
Next > Is Being a Landlord the Right Move for You?

30% increase in premiums for EACH preexisting condition on top of their current premiums and copays? Wow! That alone will bankrupt my mom. If my husband and I have to pay premiums of $5,000 and $4000 it will bankrupt us.

Thank you for this summary. Exactly what I needed.