W-4 and Your Working Spouse

Advertiser Disclosure This article/post contains references to products or services from one or more of our advertisers or partners. We may receive compensation when you click on links to those products or services.
Written by Smithee
Last updated on August 27, 2022 Comments: 20

It’s possible that this advice might be considered common knowledge, but I just learned it at age 32, so feel free to forward it to your friends who recently became part of a working couple.

The first time I saw a W-4 form at age 16, I had to take it home and ask my parents to help me with it, because the design of the thing was so oppressively boring that I could barely read it, not to mention that I had no idea what a “dependent” was. I remember my father walking over and saying, “just put zero.” Not that he was wrong, but, you know, teach a man to fish, and all that…

In the last 16 years, the design of the W-4 hasn’t improved. It’s not unique among Government documents for lacking proper hierarchy. For example, see this article about how better information design might have helped President Bush pay more attention to the memo titled “Bin Laden Determined to Strike in US”.

Here’s a snapshot of the current W-4, with an arrow pointing at the part that looks important: 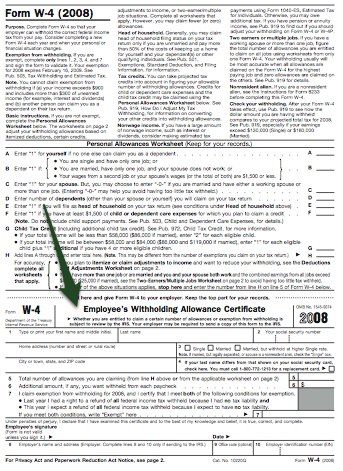 And, once you’re married, here’s where the important part starts: 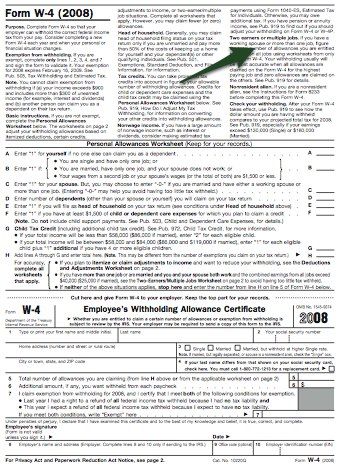 Of course, blaming others is hardly ever a good way to retroactively avoid making mistakes. And my mistake was not closely re-reading the W-4 after I was married. Had I ever spoken with an accountant or financial adviser before I was married, I might have avoided this mistake, but taxes had always been so easy. All marriage was supposed to do was maybe provide a tax break or two.

In 2007 I answered the W-4 questions honestly, as I had done ever since I started working full-time (enter 1 for yourself, enter 1 if you are married, and I ended up with a “2”), and my wife entered a total of “1”, because she’s just more conservative than me. All year long we, as a working couple, were not having enough taxes withheld. Not that we were living like kings, and we just didn’t notice it… we weren’t awash in cash. It just felt like we were doing okay for ourselves.

As it turns out, we bought stuff, and went out to dinner, more often than we should have.

The summary version is this: if you are filing jointly, and both of you have an income, only one of you is supposed to answer the W-4 questions “honestly”. More specifically, there’s a formula you can use to determine the individual settings that both of you should be putting on your W-4. Other important factors, like a mortgage payment, will also come into play when determining these settings.

Theoretically, there is a withholding calculator operated by the IRS, but every time I go to look at it, it’s “undergoing maintenance.”

There are other options out there, but it’s hard to gauge the official-ness of calculators created by companies that don’t have as much information as the IRS does.

If you’re part of a working couple, your W-4 almost certainly needs some finessing. Comment below if you have additional advice or questions for me and the rest of the readers here.

My husband and I both work full time, but I noticed that on my husband’s pay stub, at the top it says “marrired-spouse not working”….I’m worried this is hurting is on our taxes. Would it be?

I am married, both my husband and myself work. just the two of us, no children or any other misc incomes. How the heck do i fill out our W4’s??? specifically, what exactly do we put on each line, a-h and line 5.
wow, i am so confused. apparently we have been doing this wrong for years and i am at wits end! i am looking into getting copies from my employer on how i had filled mine out, but i do know we are currently taking an extra 5 for state and 10 for federal and this still isnt right, we are still negative, having to owe once again. i would like to just break even!
and a lil disclaimer: this is all like another language to me. i have no idea how to even try to use those calculators.
Someone please help! there has to be someone out there in my similar position!

im married and my husband currently doesn’t work. he’s not even in the u.s.a right now. how do i file my w-4 form, do i file seperate or joint? i know i can’t claim him as a dependent, so is there a way i can get less money taken off, since my job pays little as it it? thank you

I have a question as the office manager for a business. A fellow employee’s husband passed away recently. My question is concerning how to complete the W-4….would this employee be considered “single” or “married” on the W-4? Thank you for feedback!

Now that we are supposed to get back some money via the IRS, but it’s going to take forever to get here, why not change my w-4 so there is a lot less withheld, and get the money that way?

I just got married in 9/07 and ended up doing this correctly by accident. Knowing that we were going to be married during the year, I did the math (used the IRS calculator), changed my status to married and adgusted my witholding to 2 in January ’07. I then asked my future wife to do the same, except she never did it. I didn’t realise she forgot until the begining of December, and just figured that we would get a little bit of a refund – No big deal. Imagine my surprise when I get through the process and Taxcut tells me that we underpaid by $104. I stopped there to investigate, so I’m still not sure how this will pan out with the State, but I couldn’t be happier with the Federal results. If she had done what I asked her to do over a year ago, we would have been hit with a much larger tax bill than anticipated.

To clear up some previous comments: The number you put on line 5 of your W4 is then input in your employer’s payroll system, which spits out a withholding amount based on your payment frequency and gross pay. That’s it. What your spouse may earn or withhold is not considered in the amount withheld from your paycheck.

This reality, combined with the fact that–especially if both spouses make roughly equivalent incomes–your marginal income tax rate will likely go up, can put a dent in the whole “I got married” bliss.

Of course, financially speaking, you’re better off owing than getting a refund, as long as you’re prepared.

The IRS itself says that most people will find their (not accessible) calculator easier to use than Form W4. I have a calculator at my website that can help you with your withholding calculations. It’s a simpler version than the IRS’s to be sure, which means it won’t work for those with less common cases (like AMT) but it’s also a heck of a lot easier to use.

No one likes surprises, of course, but unless you end up with a penalty, you’ve done well to owe money on April 15th instead of getting it back.

But I agree that government forms are ridiculously complicated. Be glad you’re not dealing with form 2525 and 1116.

I’ve always found these forms to be so darn complicated. I guess that’s why I let someone else do it now, haha.

Is this issue even more pronounced when one makes a lot more/less than their spouse?

@ Aryn
There is no marriage penalty unless you both are making 6 figures.
@ John Newman
You must also be making a lot of other earned income like interest and dividends and such to still be paying in after itemizing all that stuff.

I’ve been trying to find a good way to tackle this question and still have not come up with anything good.

I get married this year and figure we’ll try having a ton withheld and then just throttle back after that (or adjust withholdings once our liability is met).

Smithee, you are my hero. This could not have come at a better time. Actually, it could have…we’re paying $3500 in taxes this year because we goofed this up. I’m off to fix accordingly. Thanks again!

We had the same thing happen. In past years, we hadn’t earned enough for it to matter (both grad students), but last year with two decent incomes, we realized in October that we were majorly underwithheld. So we ended up having almost entire paycheck and sizable chunk of his withheld in December to make up for it.

They said they got rid of the marriage penalty, but if you don’t have kids and you both work, you actually end up paying a big penalty!

Same thing happened to us — we owed $500 this year, but somehow got $380 back from the state. Worked out nicely, but my wife didn’t start work until August.

We actually just filled out a new form last night for her to send in to make sure we get things corrected. We’re going with 1 on me, 0 on her. We’ll see.

I did use that IRS calculator at one point, I’m guessing they take it down for tax season?

I could be wrong but I think the core W-4 issue with two working spouses filling jointly is that your marginal rate probably goes up due to the two (or more) incomes together but the W-4 doesn’t account for this.

I ran into the same problem when I got married. Our finances weren’t complicated, so we just did what the form basically said without thinking much about it. Well, when we did our taxes it was quite a shock when we saw the bill.

I have a spouse, a son, and a mortgage. My wife and I both claim 0 dependents and that we want tax withheld at the higher single rate. Some years we’re still under withheld.

I’ve never gotten a great answer from either the W-4 worksheet or the IRS calculator. So I just created my own spreadsheet that shows the dollar amount I need to have withheld and then I played around with Paycheck City until I got our withholdings to match that amount.

I should also point out that if you have children, or other dependents, things change dramatically.