Advertiser Disclosure This article/post contains references to products or services from one or more of our advertisers or partners. We may receive compensation when you click on links to those products or services.
Written by Smithee
Last updated on January 1, 2020 Comments: 4

Because my updates are not protected, anyone can start following me. For a while, I was ignoring the details of who was following me, figuring that even if it was a spammer, their goals wouldn’t be accomplished, because I’m not automatically interested in following someone who follows me.

However, I later found out that when enough users have blocked a spammer’s account, it can be suspended for suspicious activity and/or violating the terms of service. So I decided to do my part in helping identify the unruly mob. But I needed to come up with a system. I don’t want to block anyone unfairly.

None of the following are foolproof identifiers in their own right, but they’re all pretty strong evidence.

Way Too Many Links

Spammers want you to follow links, so they will post lots and lots of them. Many of them will point to the same place, even though the same link may have just been posted hours earlier. Consider this screenshot: 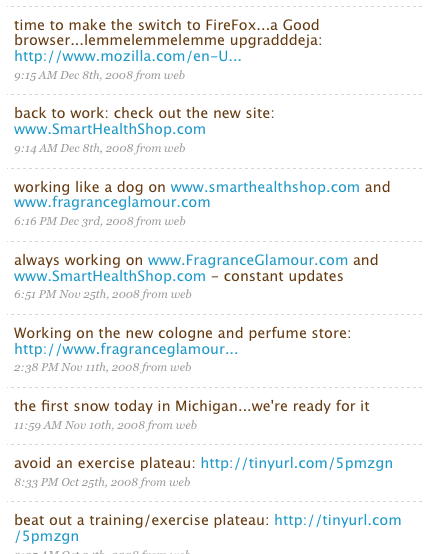 This person seriously wants you to visit those links about health shops and fragrances. Twitter is supposed to be a community, not a billboard.

Celebrities on Twitter will have thousands of followers and only a handful of people they are following, themselves. (Some celebrities will engender goodwill by following back all of their followers, but you know they’re not reading all those updates.)

Sometimes They’ll Just Tell You in the Bio

If the bio in the sidebar of a person’s profile uses any combination of “sell”, “marketing” and “online”, it’s probably a spammer.

Since the Spammer Marketing Model is just “Follow everyone”, they often forget to write anything. If you’re looking at an account that has just a few updates, and has existed longer than a week, it’s probably a spammer.

Granted, these tips don’t directly help you save money, or make money, but it is still about consumerism: if we can stop the spammers, marketing will be forced to grow up a little bit, and we can try having an adult conversation about the things we want to buy.

anywho!!! The part of your list that bugged me was that I fit into part of your categories, and I am DEFINITELY not a spammer! I promise! But when I signed up for twitter, I didn’t really know where to begin, so I googled “who to follow on twitter list” and got celebrities and stuff, and I followed like 10 peeps or more.. and until the spammers found me, NO-ONE was following me! So, about your 10 to one ratio or something, I would fit into that category, but only because I really didn’t have any friends.

Furthermore!!! about not posting a bunch of stuff, that was the case with me too, because I signed up for twitter, never really got the point, never bothered connecting it to my phone so updating it is convenient, so I have NO POSTS except for some reposts from some celebrity posts I found interesting. So actually, I fit quite neatly into two of your spammer categories, so I hope your readers take into account that the person might be someone like me, who is not a spammer, before you whistleblow me and accuse me of violating the terms of use or whatever.

But anyways, thanks for answering my twitter question, via a google search~~!! 🙂

Nice blog and I see your point however, the beauty of twitter is that we can choose to follow or not and even block if we wish. Actually I read another writers comment and he said that linking the words spamming (or I guess no-spam) and twitter together was an oxymoron. To me pretty much the total twitter experience is probably all not much more than ‘legitimized’ spam with a few scattered gems. I have about 8,500 followers that I have built up over a couple of months and I don’t mind who follows as I am not particularly selling anything just ideas. (I do have ads on my website however if I tried to live off that income I would probably starve to death).

The real value in twitter (for me anyway) is that like you I’m a blogger and it presents me with a great way to promote my blog. As I blog on career issues, management, leadership and teamwork the bigger my audience from my point of view the better. For years I blogged, sat writing articles had a few visitors and every now and then a comment or two. Twitter gives me instant feedback because often now someone will RT my tweet (that leads to my blog) and you know that there are people out there that are getting something from your sometimes hard to find words and efforts. I also link people to other’s well written articles so there is a balance of my stuff and things I find as I research for management information on the web. Then of course every now and then you get another compliment, the coveted #followfriday.

I was discussing twitter today with someone who just didn’t get it at all until I explained that you can have locked tweets to talk about private things with your friends, if thats your thing. Emails tend not to get written so twitter is a good substitute for many. I find that a boring approach myself and actually state on my profile and “thanks for following” message “no boring personal tweets”.

I have noticed over time that I, even amongst the clutter, eventually link up with people that provide good quality information in my areas of interest and on “tweetdeck” I just add them to my favorites list and they are the core of my quality group. If I did not endure the overall ‘spam’ I would (perhaps maybe) not have connected with the cream. Its a bit like milking a cow I guess, you have to get all the milk and separate the cream later.

Finally, many people are rejecting twitter as a fad however, whether you’re selling ideas (in a hope to influence) or real world products I think it is a case of “ignore it at your peril”. Additionally you wouldn’t stand at the front door of your real world supermarket and vet who was coming in and turn away the ones you didn’t like the look of, well I wouldn’t anyway.

Ric ( I tweet as http://twitter.com/rictownsend and my website is http://www.orglearn.org (or is telling you that a bit spammy 🙂 You can edit it out if you think it is.

I wouldn’t mind getting rid of the following Twitter users as well: “social media gurus,” “online-marketing aficionados,” and the self-proclaimed “internet entrepreneurs.”

They may not technically be spammers but I would like them to find someone else to bother.

I agree, let’s also add SEO experts to the list. I realize they have semi-legitimate goals of boosting their profile, but it just seems very slimy. Kind of like the people who hand out their business card to everyone they meet and schmooze/compliment and stick around long enough to see what they can get from you.